The day began with a flurry of activity. The bride, Liang Jiamin, known as Bee by all her friends and family, was in her bedroom in her family’s home in the village of Doumen getting ready for the all-day event which lay before her. She was preparing to marry, Jonathan Michael Castillo, an American photographer whom she met while working in the nearby city of Zhuhai.

While all the preparations were taking place in the bride’s home the groom, Jonathan, was busy getting himself ready as well as organizing the transportation for all his out of town guests. Several of which came all the way from the United States and one even from Russia, for this momentous event. It was probably the first time such an event ever took place in the village of Doumen and for many of the locals it was most likely the first time they had ever seen foreigners in person.

Upon the arrival of the groom and all his out of town guests he and his groomsmen were guided to the bride’s home where he is expected to collect his bride and take her to the ceremony. However, before he is even allowed to even see his bride, he must first complete a series of challenges which the bridesmaids have planned for him.  The challenges are meant to be silly and fun which Jon and his support team all took part with great enthusiasm. 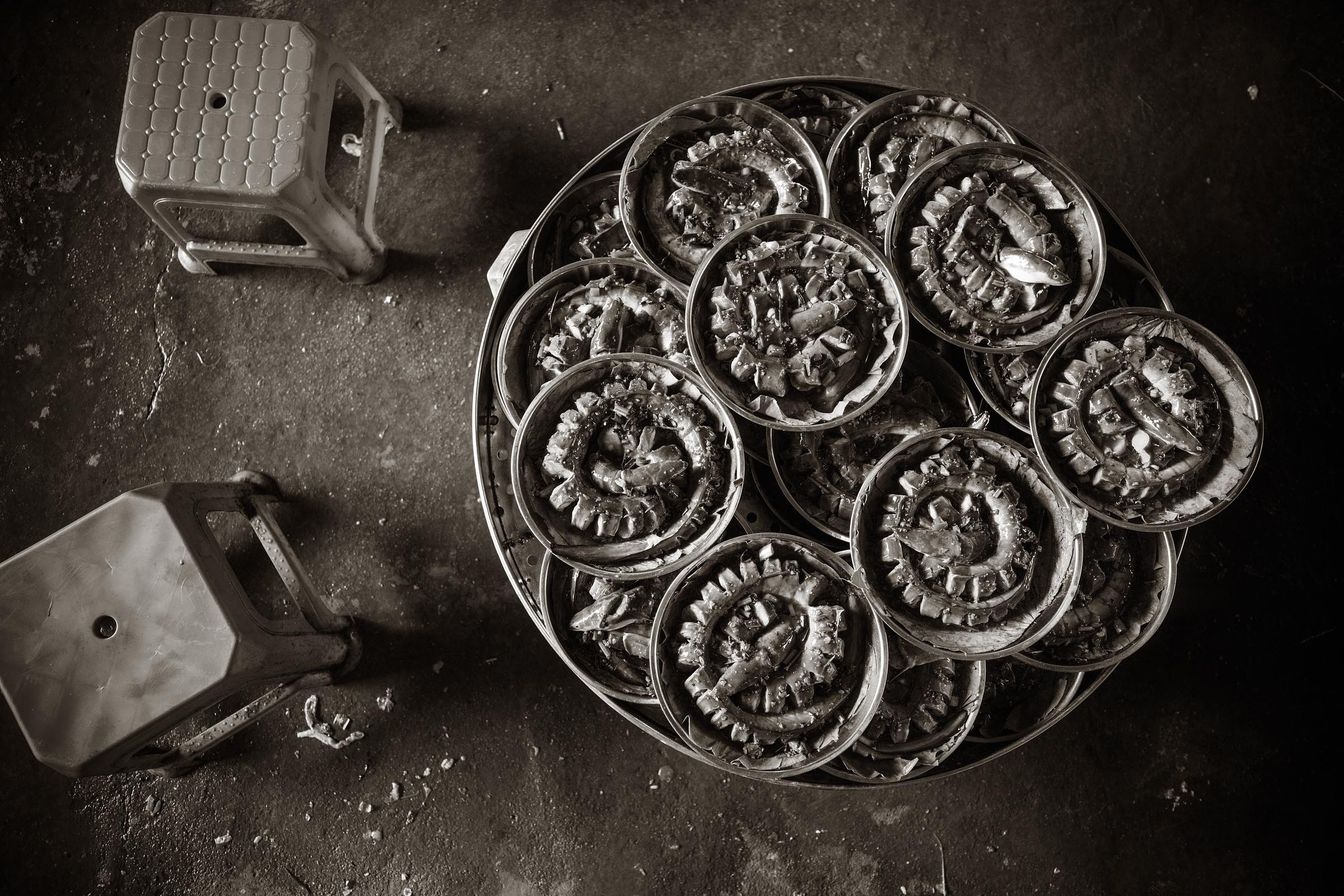 I recently was given the opportunity to shoot nearly 100 dishes for a new restaurant in Shanghai called Lost Heaven Silk Road. I’ve worked with the owners, Robin and Peter Yin, on a number of projects over the years. For anyone that has spent time in Shanghai you may be familiar with their Lost Heaven Yunnan cuisine restaurants. For this new venture they have gone northwest to the Silk Road Region of China and have created menu which captures the flavors of the region.

Working with Robin, who provides the inspiration for most of the dishes, is a lot of fun because he enjoys the visual process as much as creating flavorful dishes in the kitchen. So the approach for this shoot was to not only create a photo for each and every dish but to also capture them in a visually interesting way. With that in mind I set out to create a series of photographs in which a variety of backgrounds were used. Typically when I work on location I try to incorporate elements of the venue I’m working in. However, for this shoot the venue where I was working was still a construction site I had to scour the building, as well as the junk pile behind the building, to find materials that seemed appropriate.

The room I was in was full of paintings which were being created to install as part of the interior design of the new restaurant. Some of these painted panels were very useful as backgrounds.

When traveling I’m limited in the amount of equipment I can carry. For shoots like this I’ll usually bring two Einstein flash heads, reflectors, softboxes, a few light stands, a couple of camera bodies, a bag full of lenses, radio transmitters, light meter and a bunch of other bits and bobs. One of the most useful things I carry is a piece of black cloth which comes in handy for any number of things from blocking out light to using as a background.

One advantage to having two lights is that I could set up two shooting locations at the same time. With so many dishes to shoot it was necessary that I keep working in order to get the shoot done within a reasonable amount of time. If all the dishes were shot on the same background we could have probably done everything in less than two days. For this project we got it all completed in three days.

Note: All images above are pretty much straight out the camera with no retouching.

Whenever I’m assigned to shoot a portrait I always try to arrive early to get set-up and do some test shots so that when the subject arrives we can get right into shooting without having the subject watch me monkey around with my lights and camera. Typically I work with one assistant but sometimes I have to work alone which slows down the entire process. The other day a last minute assignment came in and my regular assistant, Sing, was already committed to another job. So, for the test shot, I set the camera to self-timer and I jumped into the scene. I’m sure that the people watching this process thought that I was some extremely vain dude as I kept going back and forth from camera to lighting to self portrait over and over.

Technical Info: Image shot on a 5D RS with a 16-35 f2.8 lens exposed at f8 for 1/5 sec. Two Godox Wistro AD360 strobes were used, each mounted with a small Chimera softbox and honeycomb grid. To light the wall holding the shield one of the grids on the softbox was left slightly open so a bit of light could highlight this area.

A Few Minutes with Steve Wynn

Photographing a man like Steve Wynn is no easy task. When Forbes magazine asked me do a cover shoot of the Vegas mogul back in 2012 I remembered back to my first encounter with Steve Wynn when he allowed me to shoot a total three frames. I was nervous, to say the least, and hopeful that this time the man would allow me to shoot a few more than three images. To add to the stress Forbes also wanted a second shot from a different location to be used in the inside spread. With the help of the Wynn marketing/PR team we scouted two locations in close proximity to each where at one I could set up a little studio and at the other do an atmospheric shot. On the day of the shoot I, along with my assistants, arrived several hours before the shoot and set up at each location and did some test shots. Then we waited. There was absolutely no way to know how this shoot would go until the moment Steve Wynn walked onto the set. If his prior meeting had gone all wrong and he was in a bad mood he would either be impatient with me or not show up at all. As the minutes ticked by we all nervously waited until finally it was announced that he was on his way. Upon his arrival I stepped forward and introduced myself and guided him to our little studio set-up. He was polite and in good spirits and we talked about his famous friends like Andy Warhol, whom he mimicked during the shoot. I shot as many frames as I could offering subtle direction but also trying to keep him animated and entertained. After a few minutes we then headed over to the other location where we quickly did a few frames with him in front of a big golden dragon. When it seemed that the magic was fading and not much more could be done I thanked him for his time and patience and off he went. The shoot lasted a total of 21 minutes and I managed to shoot 111 frames. A big sigh of relief could be felt by all as he and his entourage disappeared into the hotel.