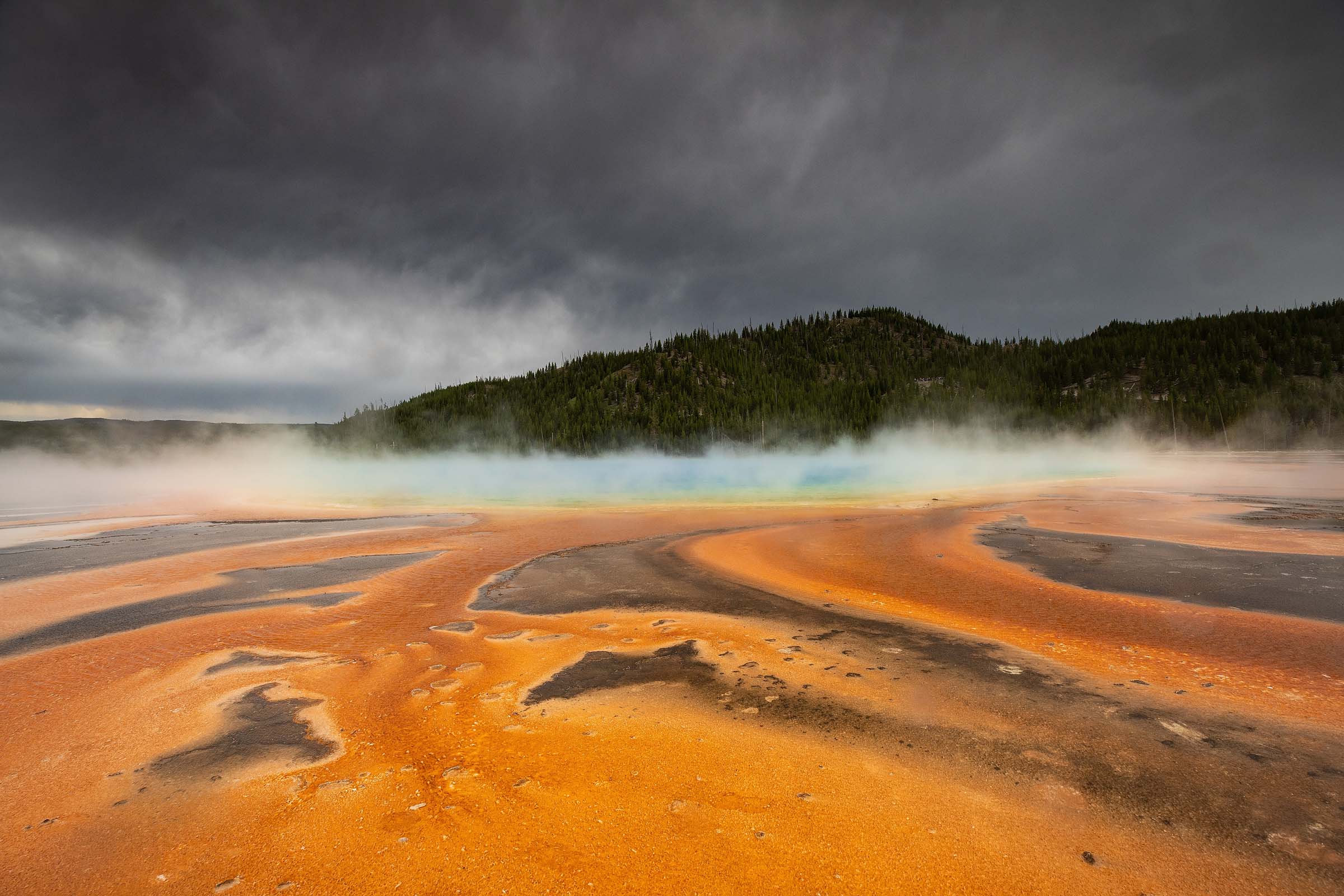 Steam hovers over the Grand Prismatic Spring in Yellowstone National Park. The orange and brown colors that encircle this spring are heat-loving microorganisms called thermophiles which contain colorful pigments.

While cruising around Yellowstone National Park I began imagining that if aliens were to make this area the first place they visited they may think they were seeing a planet in its early stages of development. At almost every turn one sees steam rising from fumaroles, bubbling mud springs, geysers spewing water into the air, and colorful bacteria growing around devilishly hot springs. With all this geothermal activity it’s almost like this place is a living breathing organism. 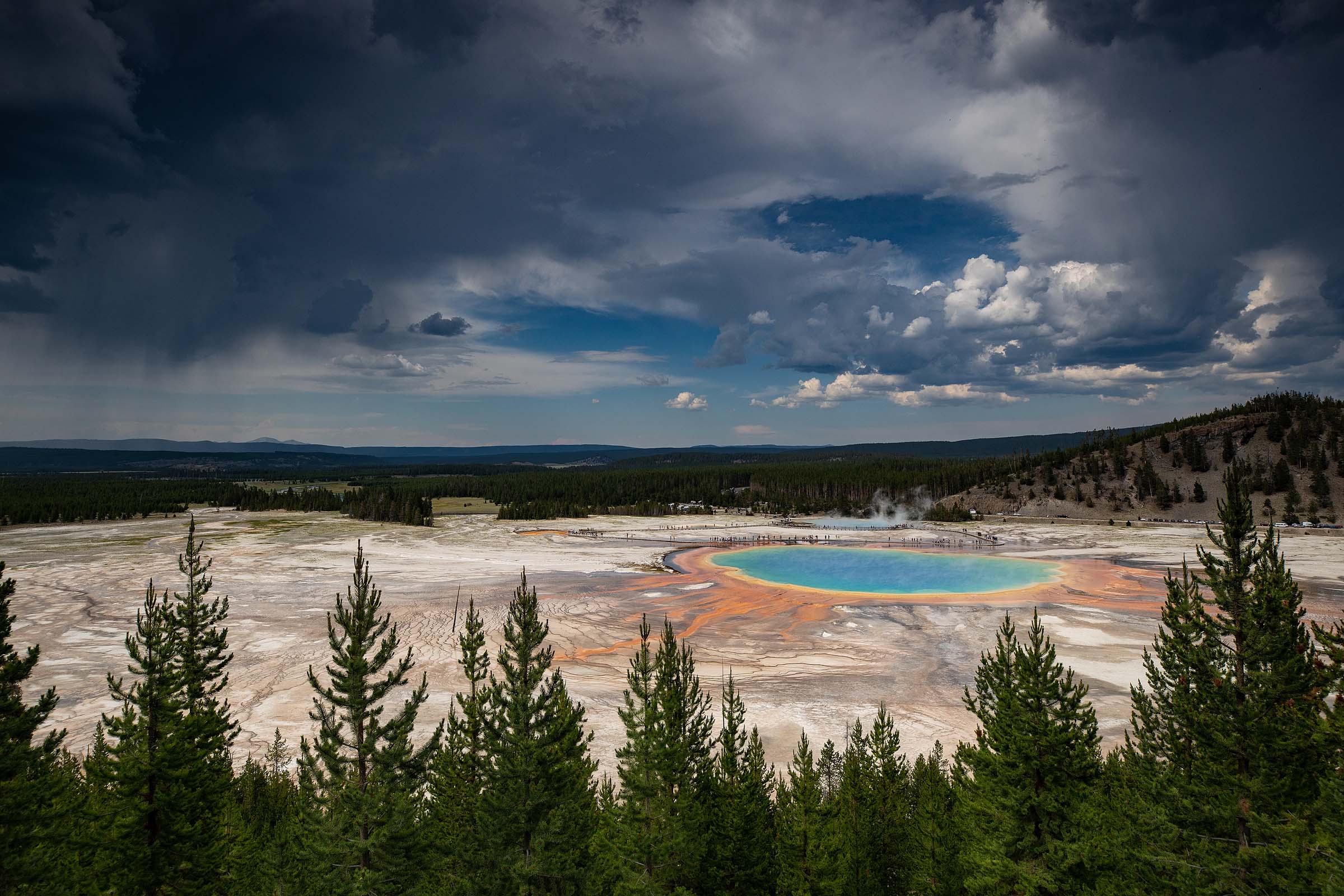 A view of the Prismatic Spring from a nearby hilltop. 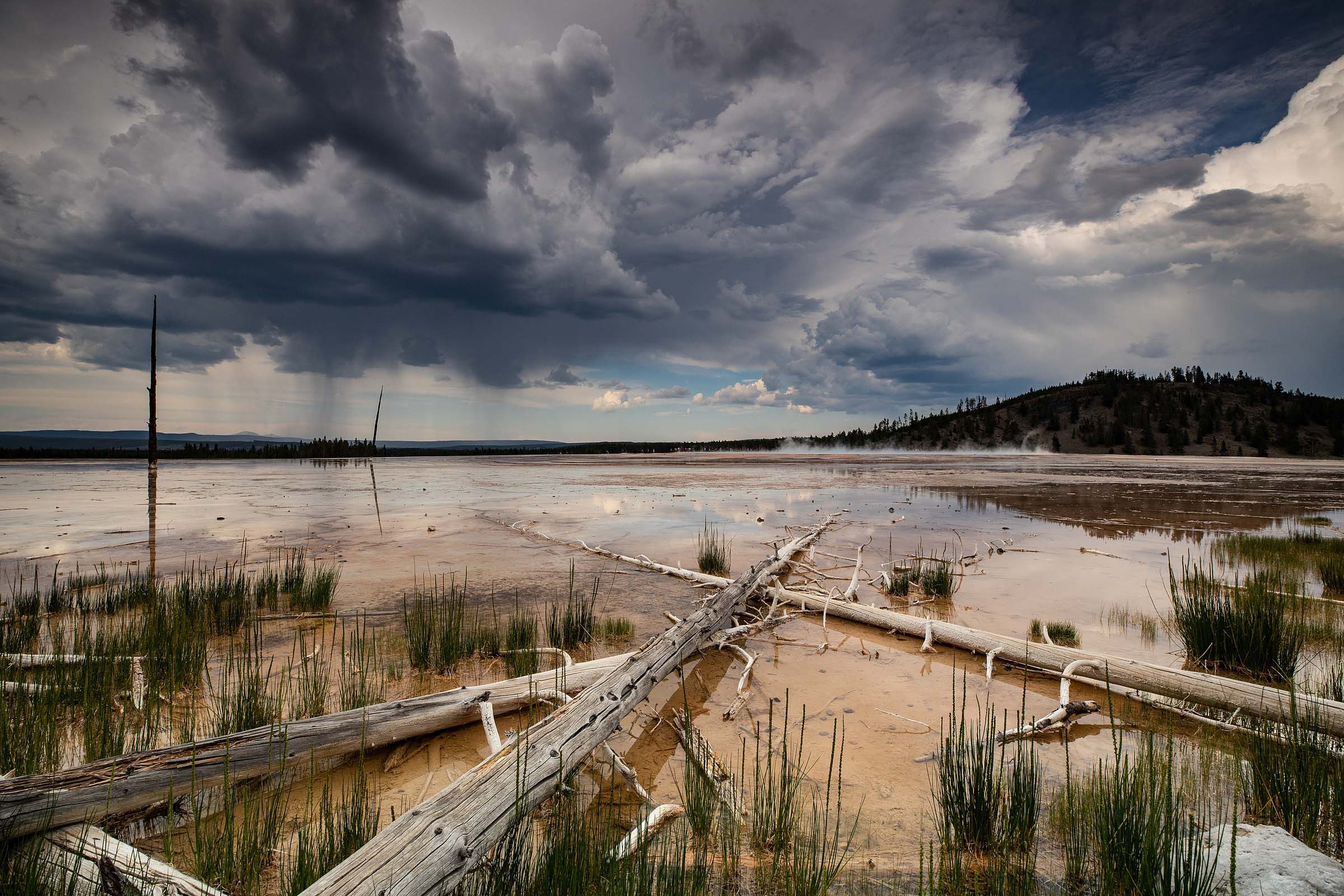 Storm clouds moving in over the Midway Geyser Basin.

To prepare for this trip to Yellowstone took a bit more planning than I usually do. Mainly in the form of making a reservation for a campground. National Parks in the US are now so popular that it’s nearly impossible to do a spontaneous trip. For this trip I had to get up early one morning in March when spring and summer spots would be opened up for the Mammoth Campground. Within seconds I could see that sites were going fast. I was teamed up with another couple who also wanted to see Yellowstone so together we just starting booking dates. Our initial plan was to go at the end of May but those sites were quickly reserved so we began scouring the site for open dates. Suddenly some sites became available in late June/early July. We grabbed them. I wasn’t keen to be in a national park over the July 4th weekend but it was either that or try again next year. As it turned out the holiday weekend wasn’t as crowded as I had feared and we all had a good time. 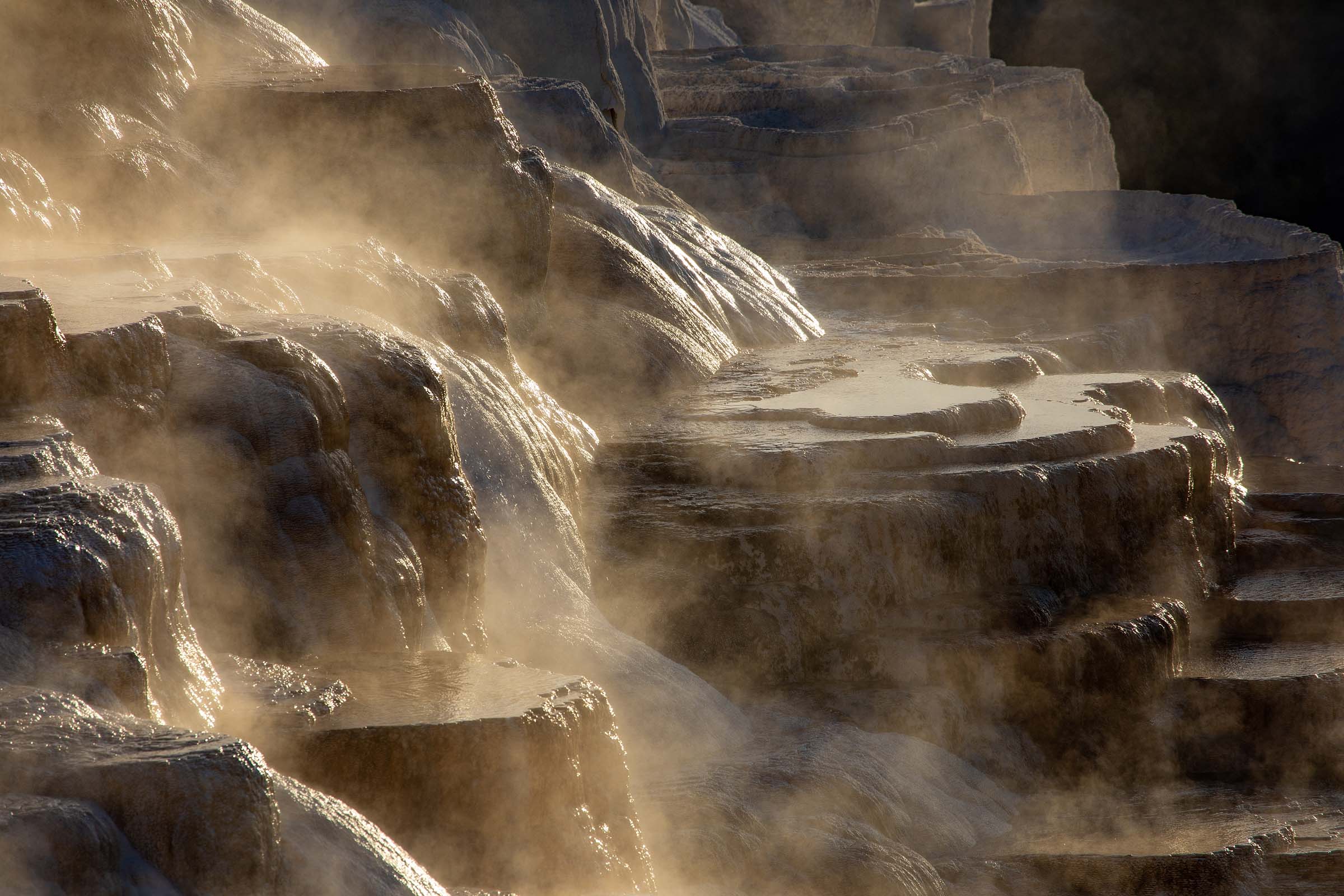 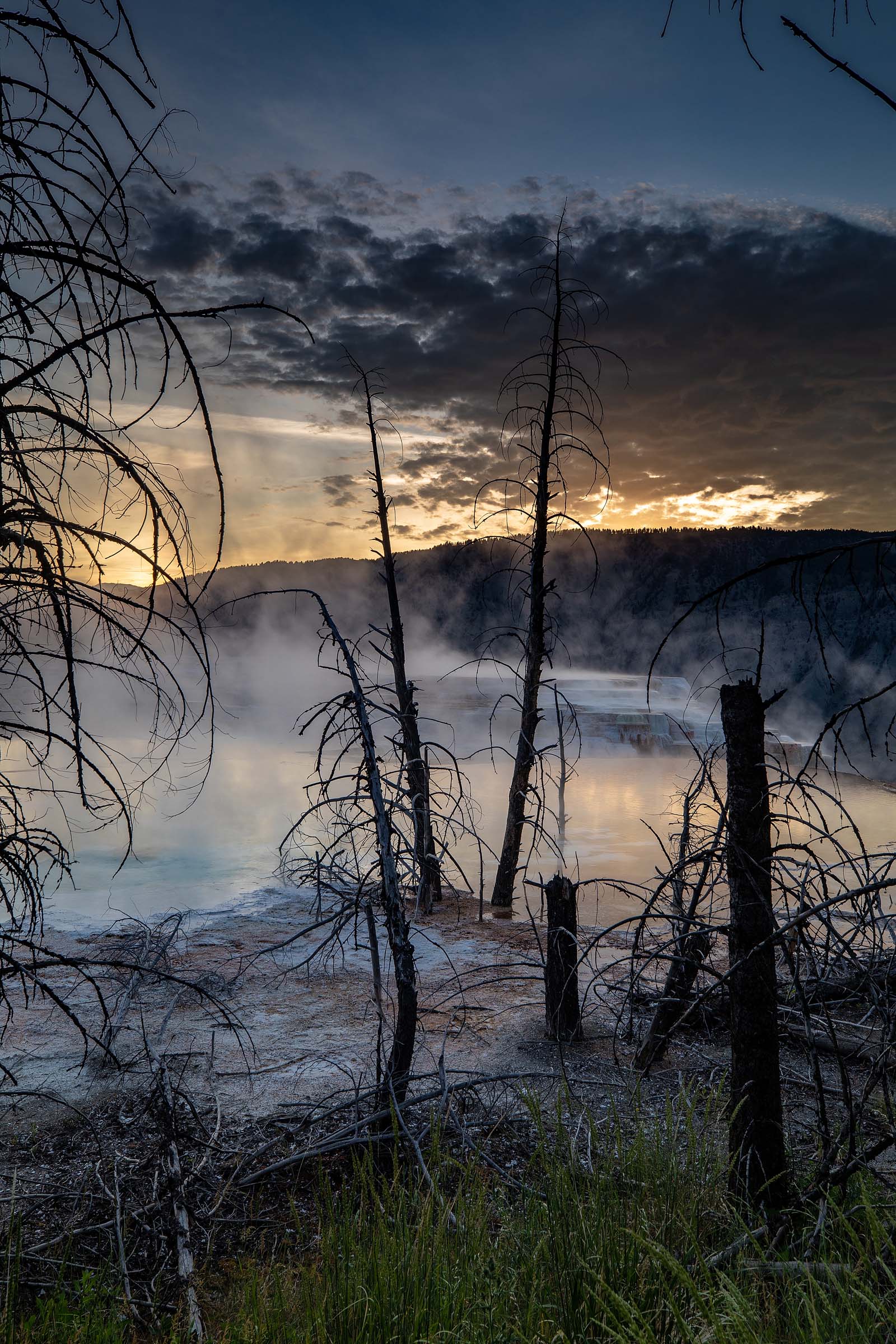 Camping near the Mammoth Hot Springs gave me the opportunity to revisit the springs at different times of the day. That meant dragging myself out of my cozy sleeping bag at 5 a.m. on more than one occasion. The upside was being able to return to camp early enough to enjoy a hot breakfast with my wife who was just emerging from her cocoon.

Places like the Mammoth Hot Springs do get crowded during the day. However, in the early morning hours or in the evening, these places are nearly empty. This was doubly important to me because I’m often shooting longer exposures which require my camera to be on a tripod. Since many of these areas are only accessible via a wood boardwalk it means a lot of shaking can take place every time someone walks by. This was rarely a problem prior to sunrise and those that were out at that time were of a similar mind and tended to walk softly or just keep their distance. 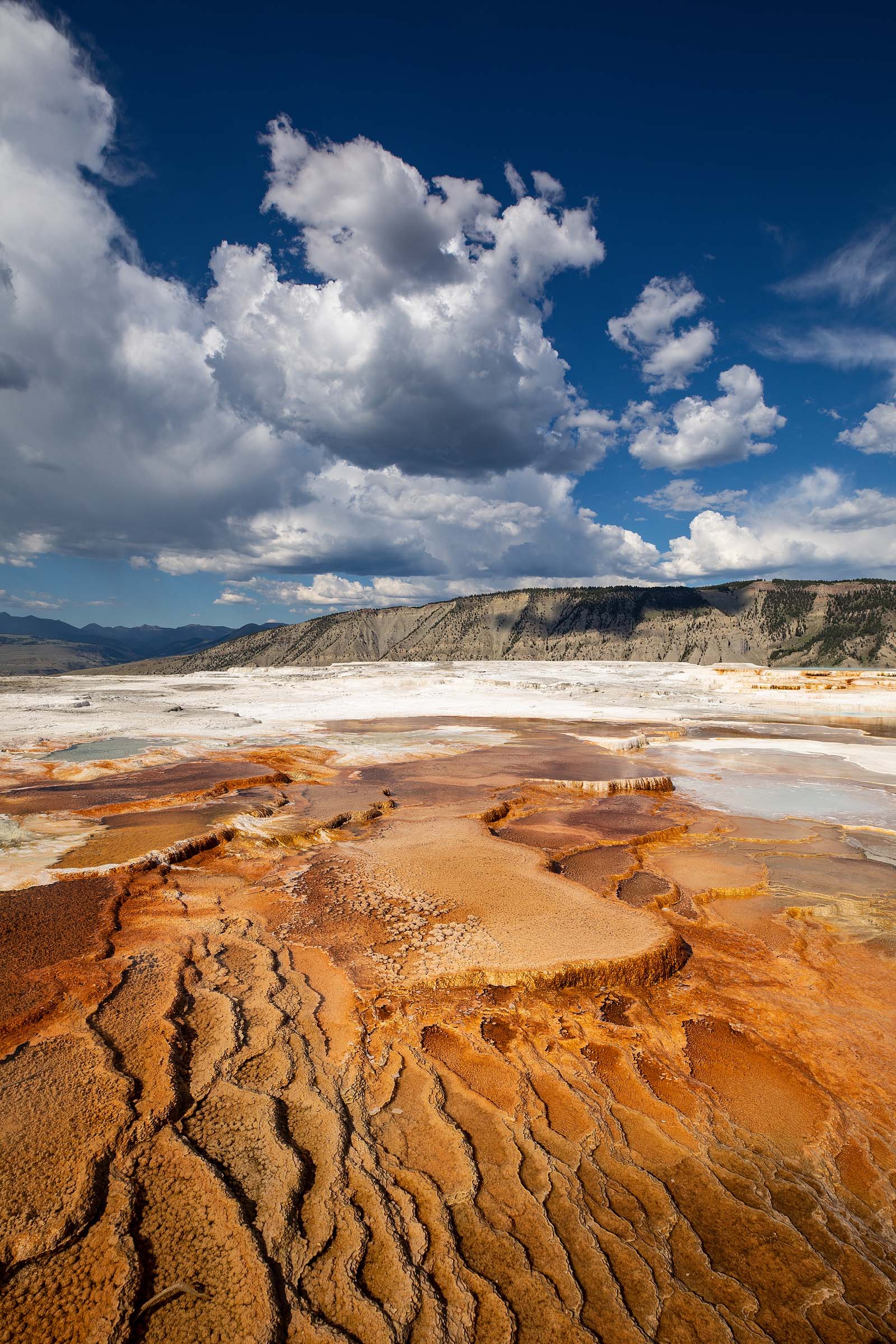 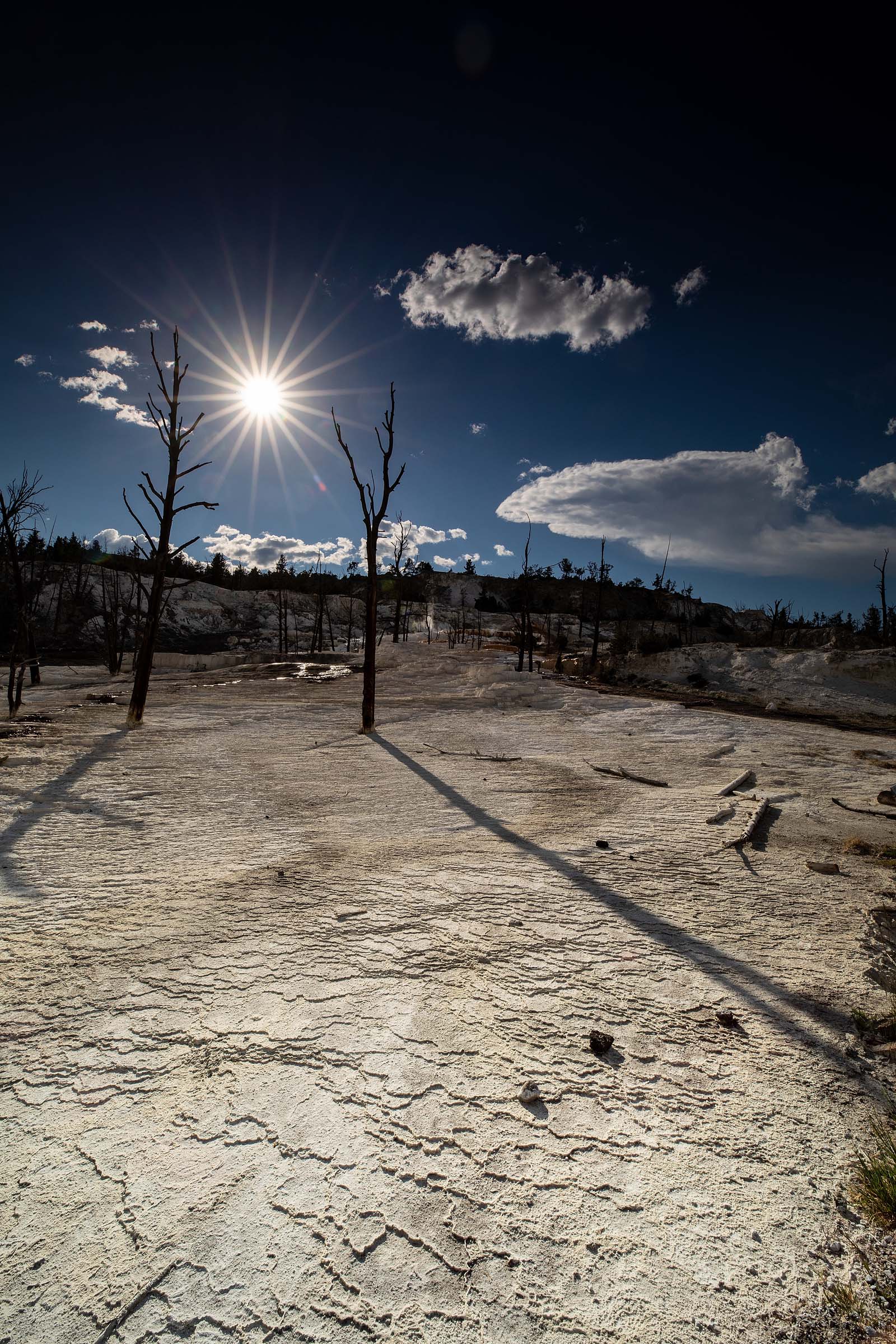 No trip to Yellowstone is complete without seeing Old Faithful spout like a breaching whale every hour or so. Just being there was quite a spectacle. People throughout the world come and wait patiantly to see this event. Rangers stand by answering questions with the most common one being, “What time will it blow?” Apparently it’s quite uncommon for geysers to blow in a predictable manner but Old Faithful has been doing it for years and years. The only thing that has changed is the length of time between eruptions. Like a true entertainer this geyser will first tease the crowd with increased steam and then a small eruption followed by another small eruption a few minutes later. Then, all of a sudden, hot steaming water shoots high into the air. 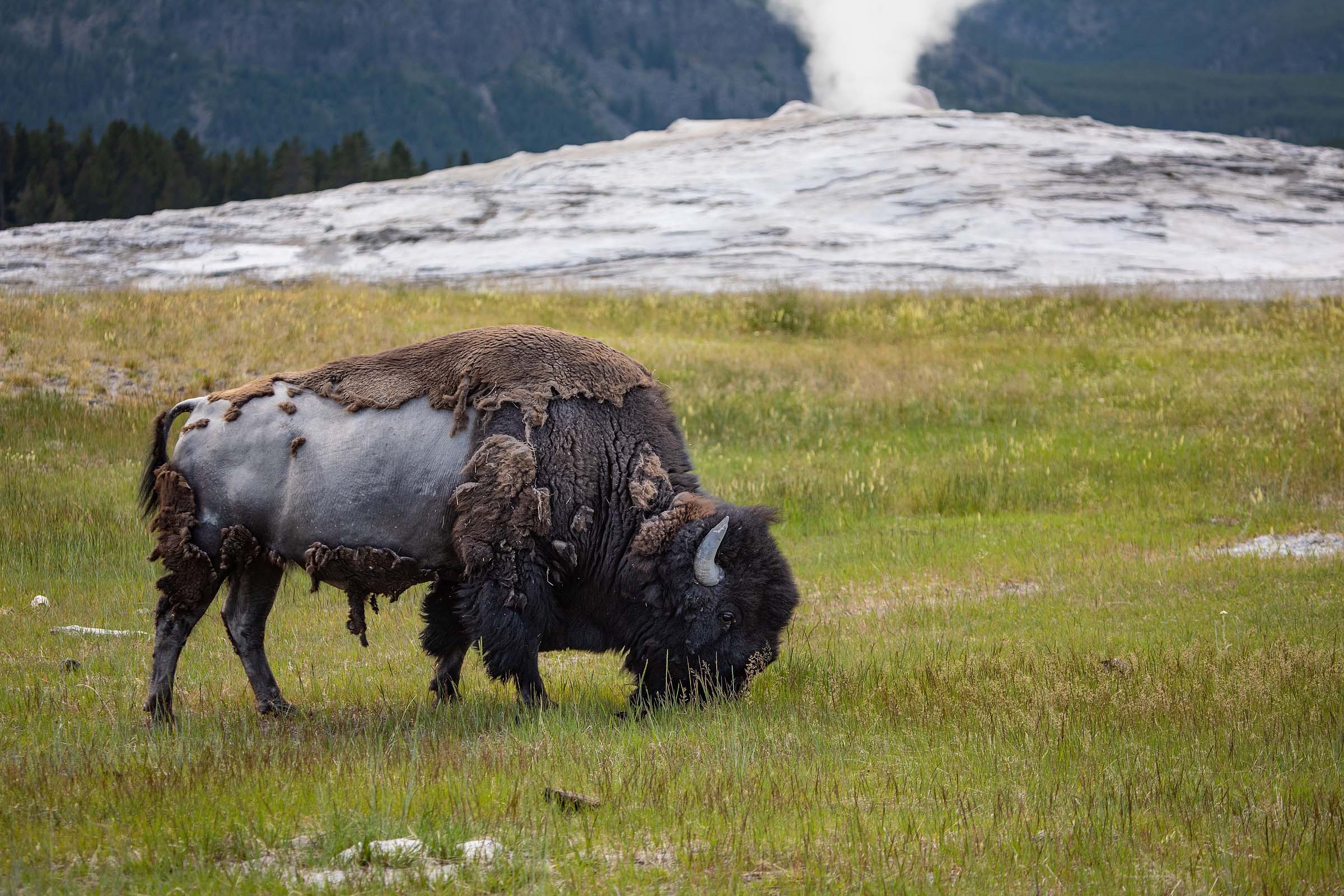 A bison, now loosing his winter coat, grazes at the base of Old Faithful.

Each day was filled with something new to see and explore. In addition to wanting to see as many of the sites as possible we were also keen to spot animals we had never seen in the wild.

It was always easy to know where the animals were because a line of cars would be pulled off to the side of the road. One of the most common animals to be found in Yellowstone are the bison. They can be in herds or seen in solitary situations. They move slowly but park materials warn visitors that if properly motivated they can reach speeds of 35 miles per hour. Since I can’t run that fast I always made sure I had something large to jump behind in the event I angered one of the many bulls we encountered. 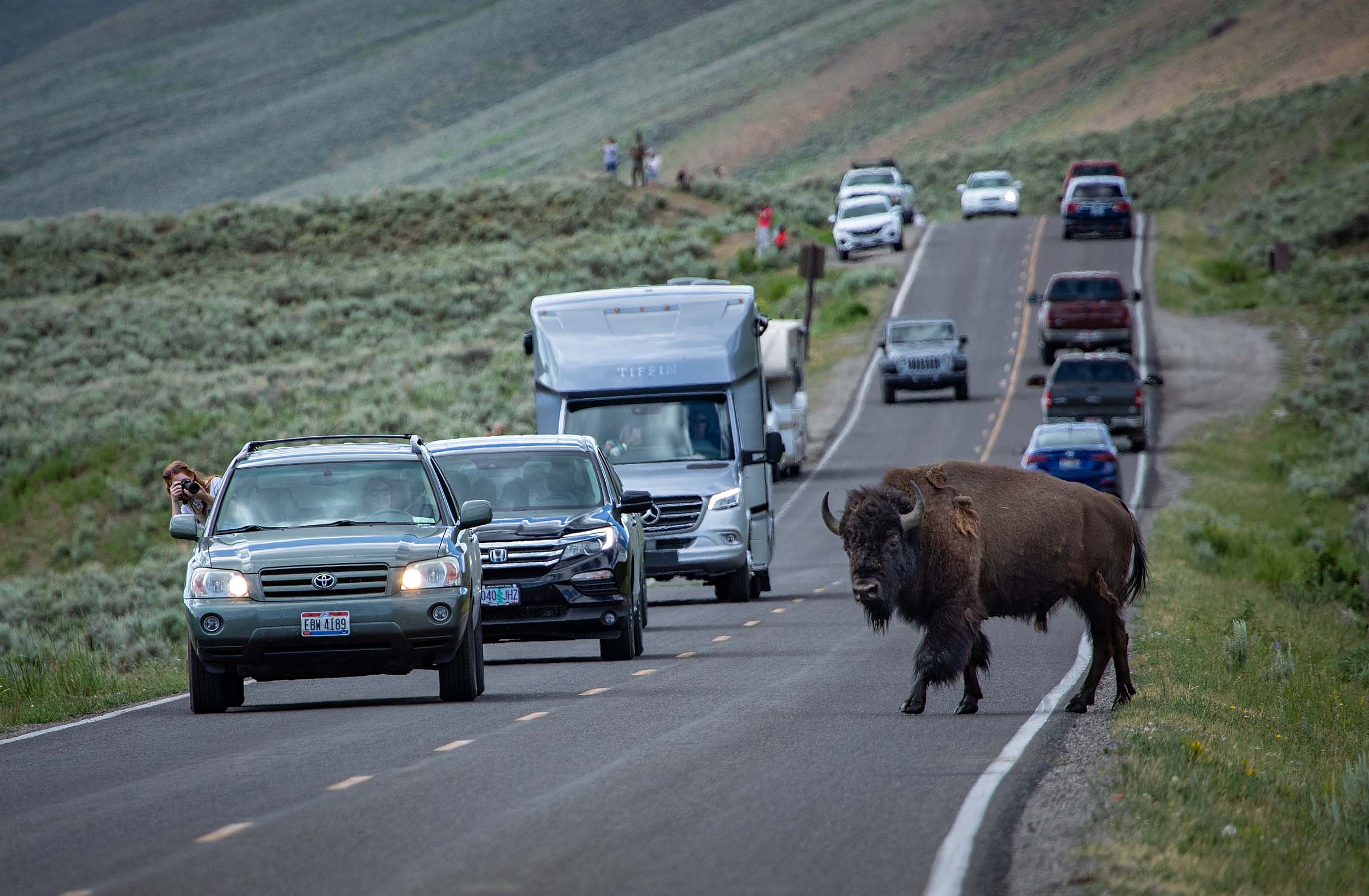 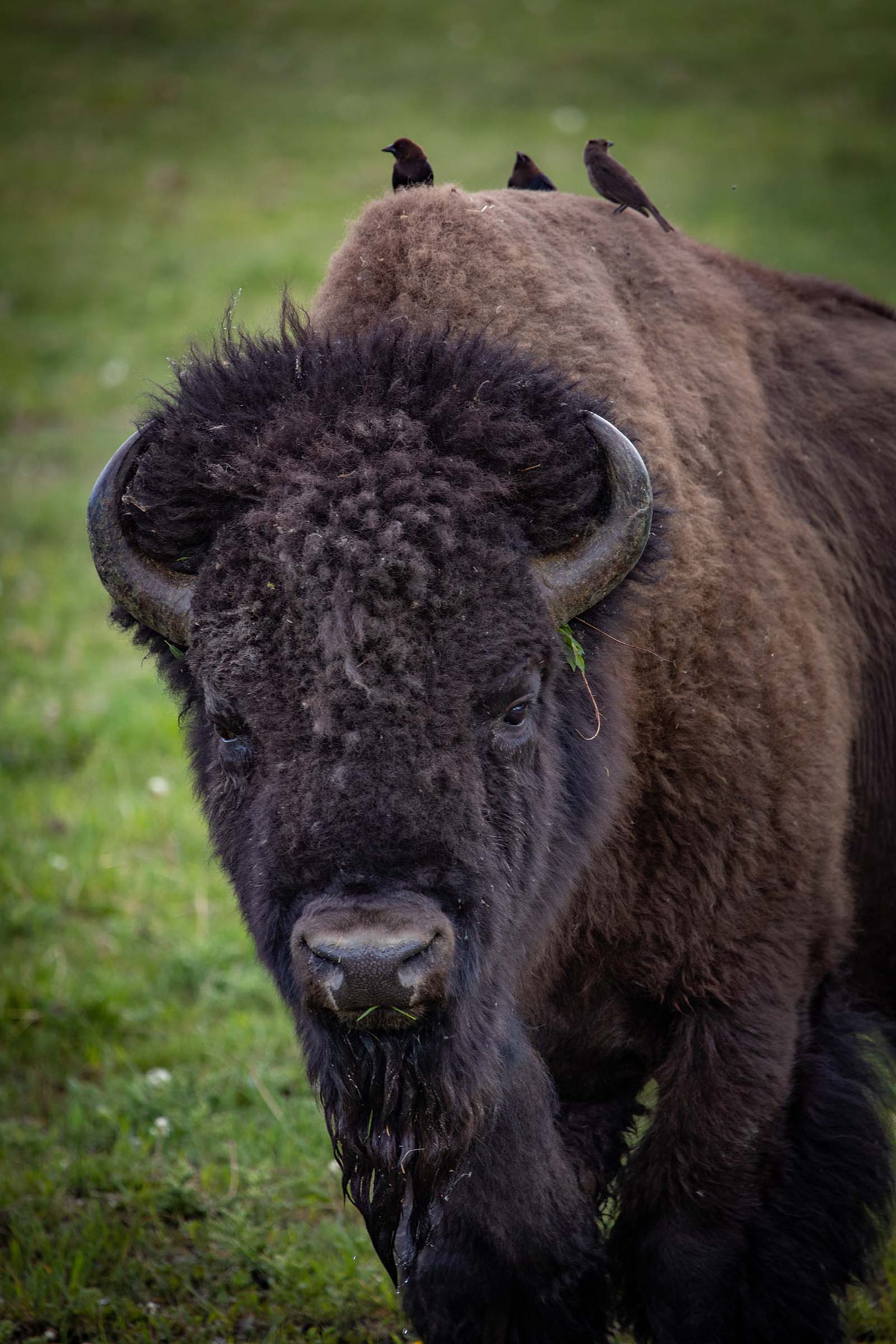 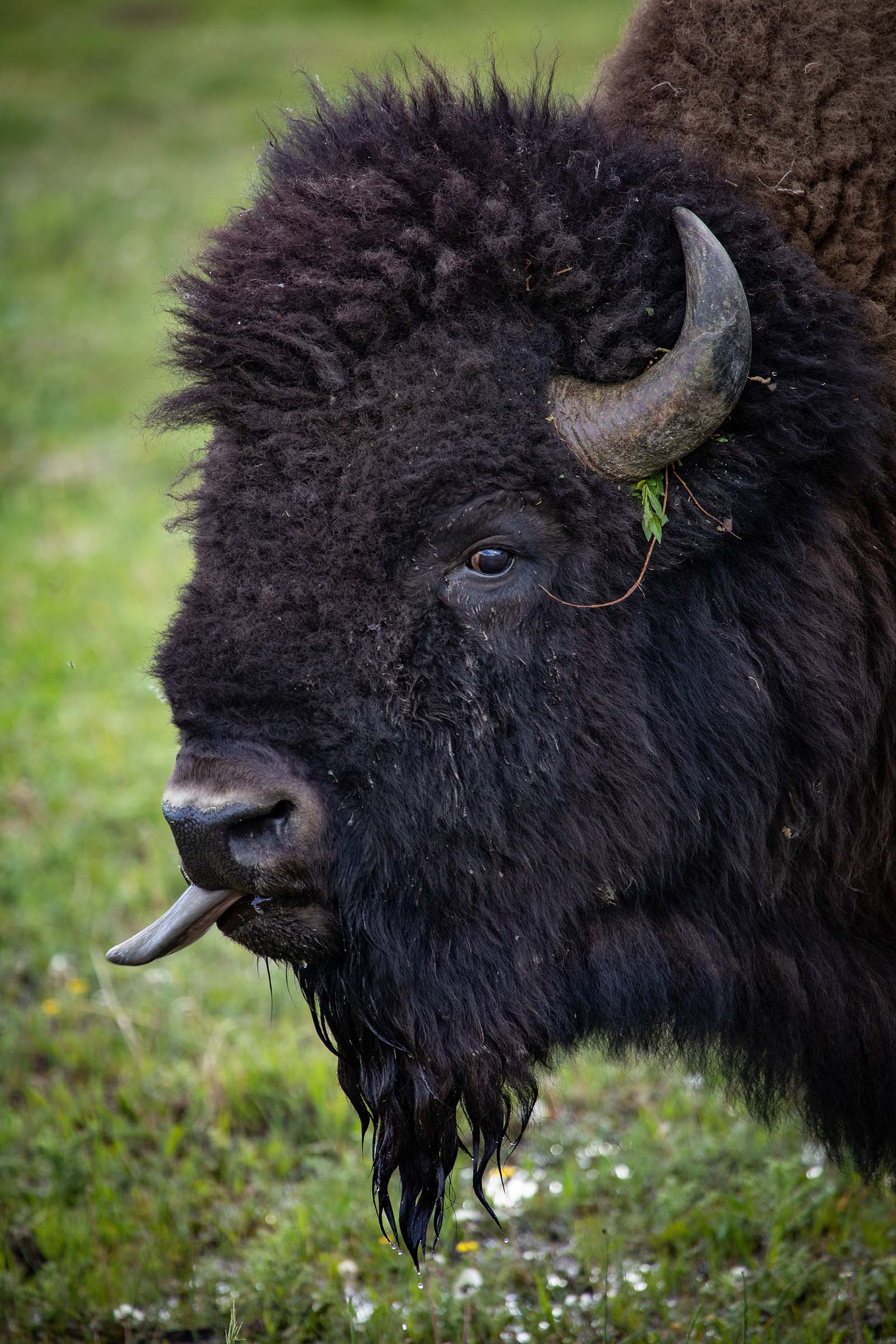 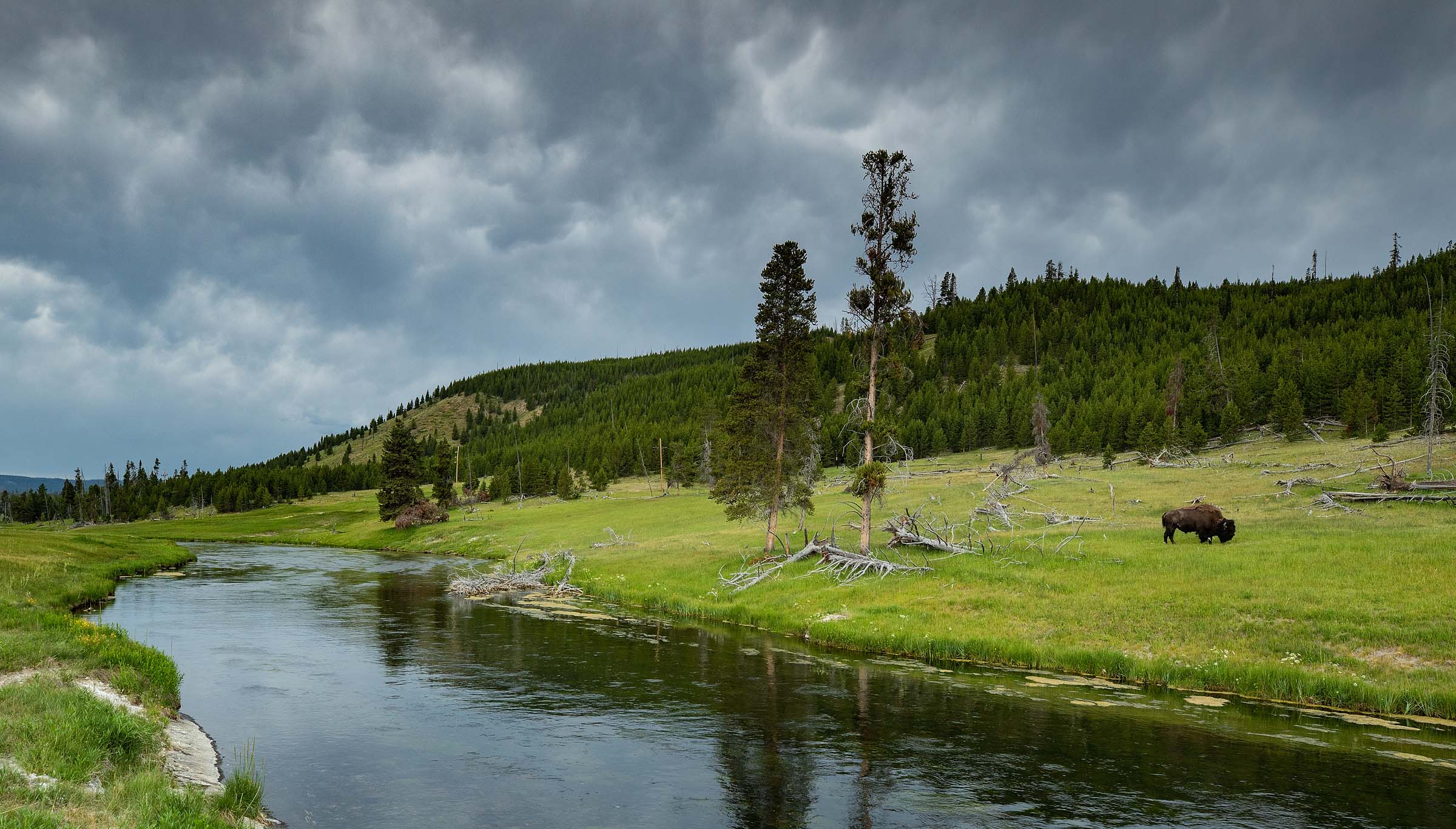 On one of our hikes we visited Trout Lake and were surprised to run into a family of Canada Geese. I’ve only seen these birds flying over my home during their migratory travels so to see them up so close, and with their little ones, was quite a treat. 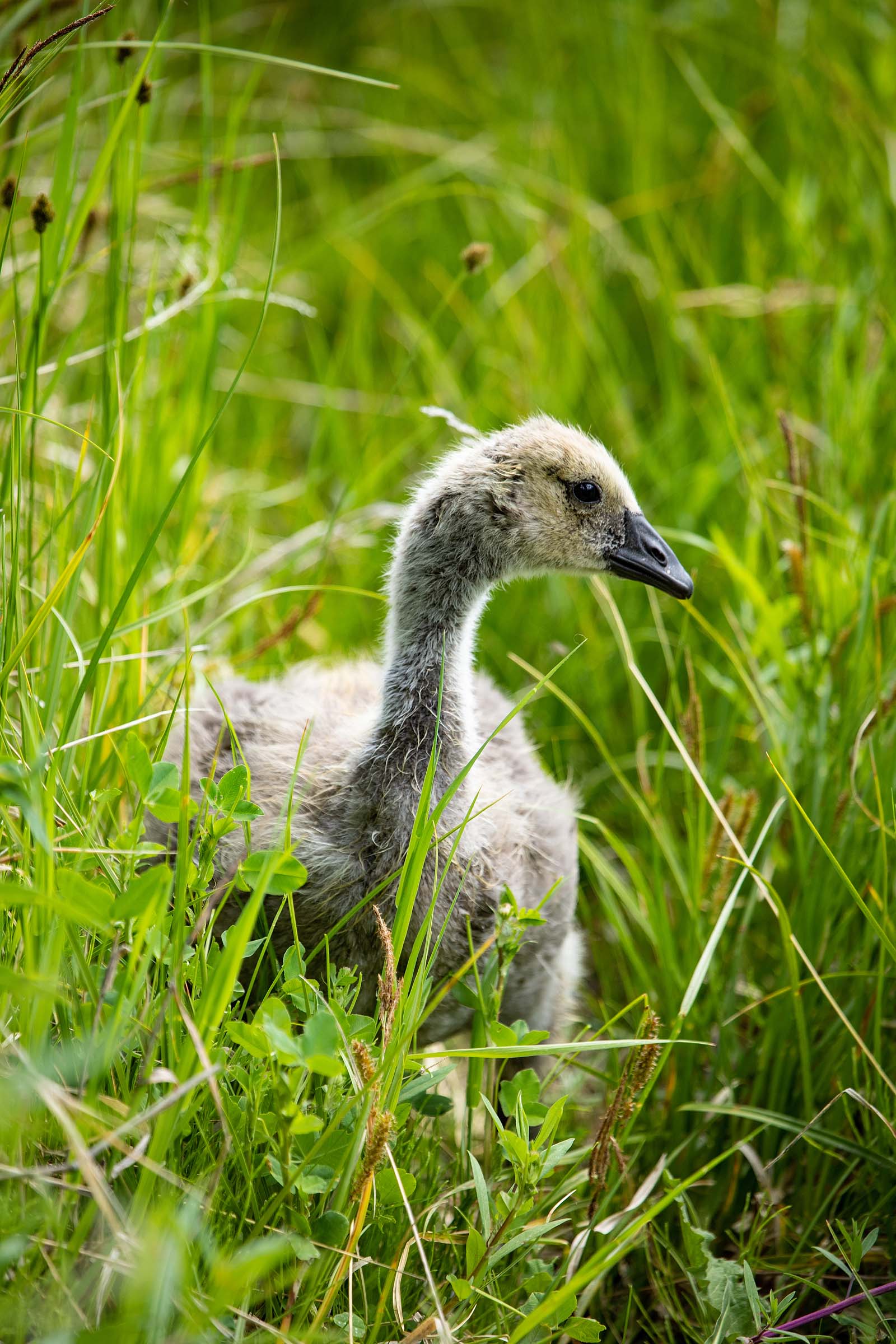 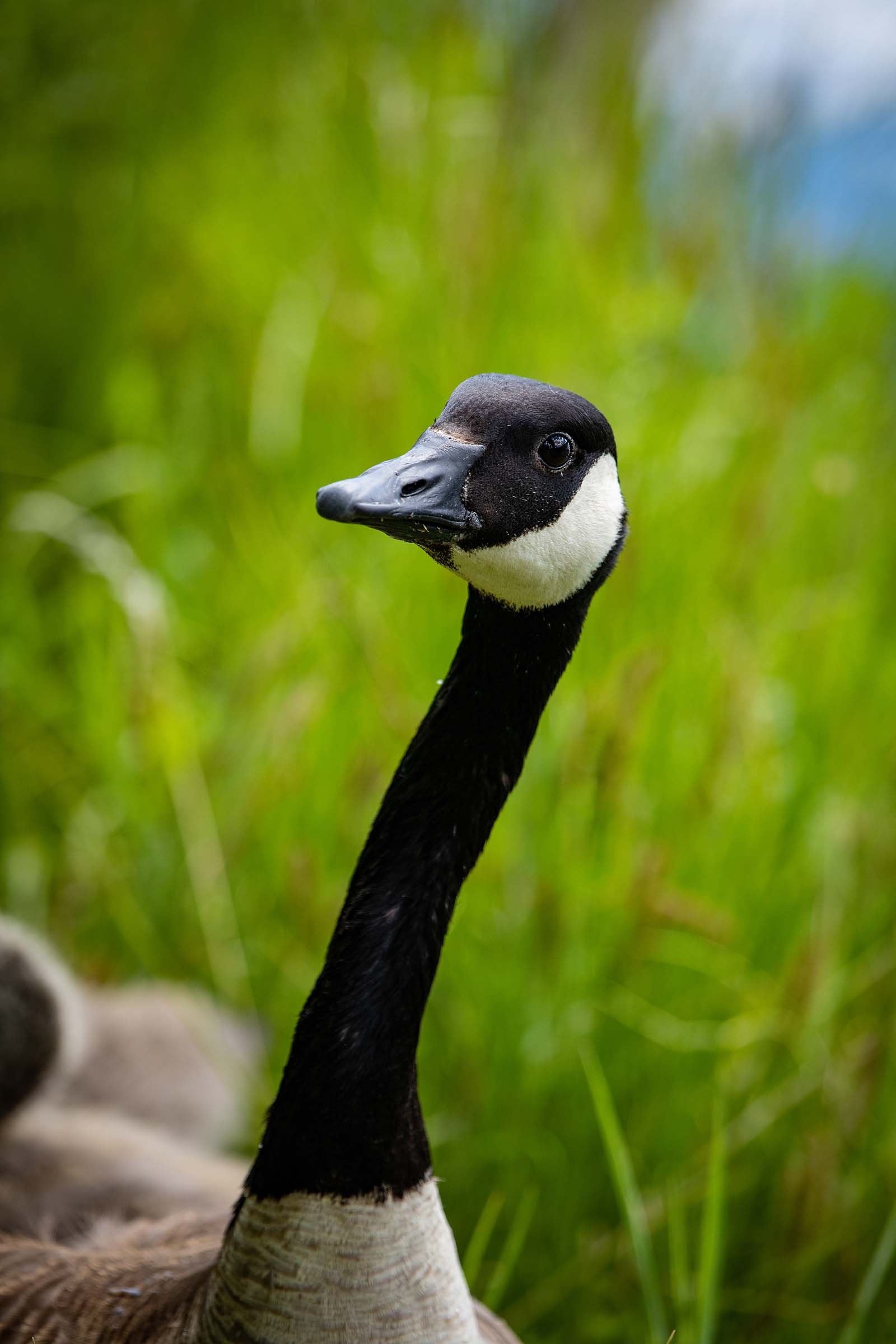 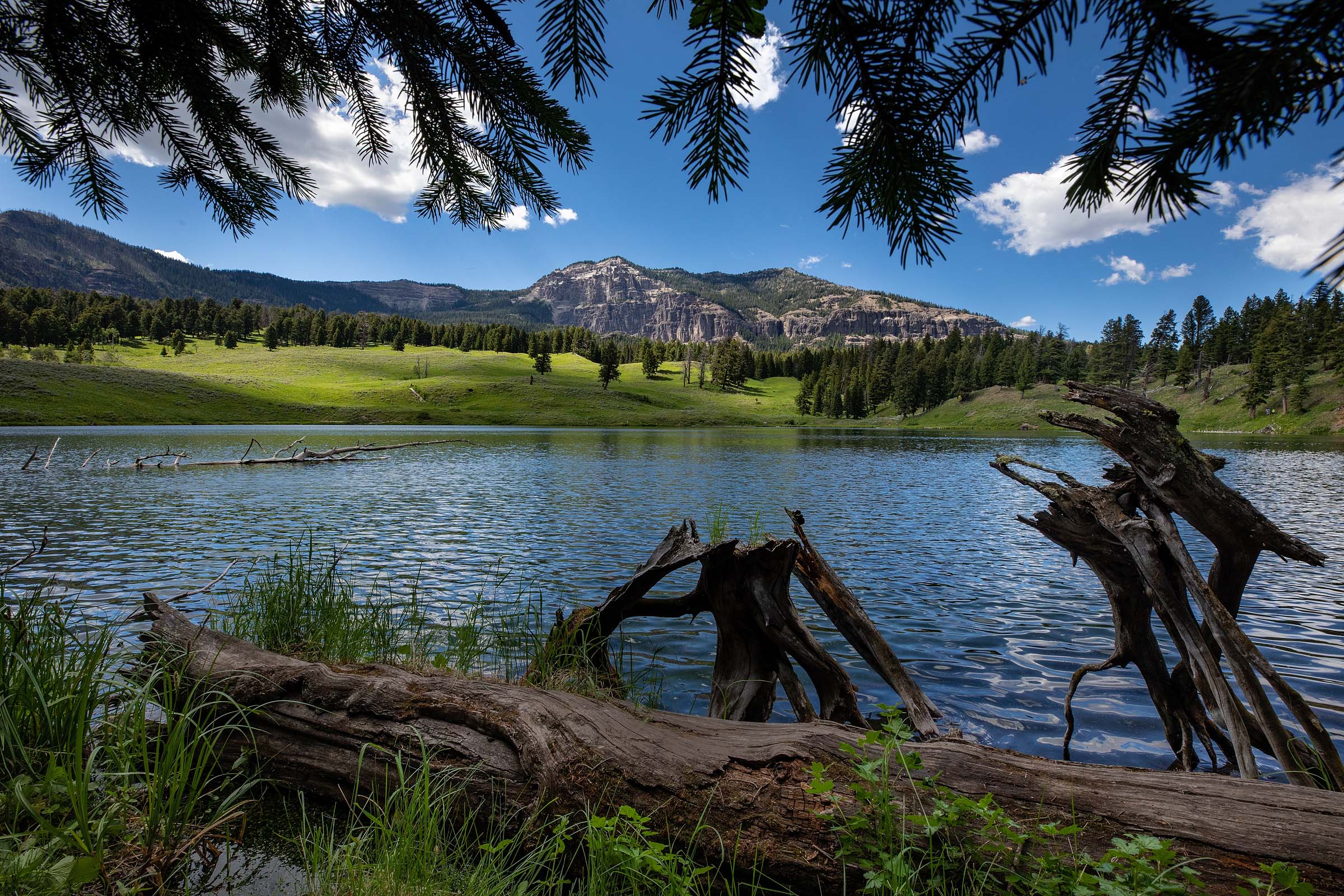 Late one afternoon as we were heading back towards our  campground we saw cars stopped along the road. We knew an animal had been spotted and we both thought that it’s probably just a bison since we had seen so many that day. Then off to my left, in the meadow, I saw him. A grizzly bear was making his way across the grassy field looking for his dinner. I quickly stopped the car and jumped out with my camera in hand. As I followed along side his trajectory, snapping photos as we both walked, he turned and began walking in our general direction. I slowly moved back up onto the roadway and stood there beside some other onlookers. As the bear stopped and looked our way I asked the man standing next to me if he was a fast runner. He replied that he wasn’t to which I said, with a smile, good to hear. We both laughed nervously. The bear, however, had little interest in us and simply turned and walked away. 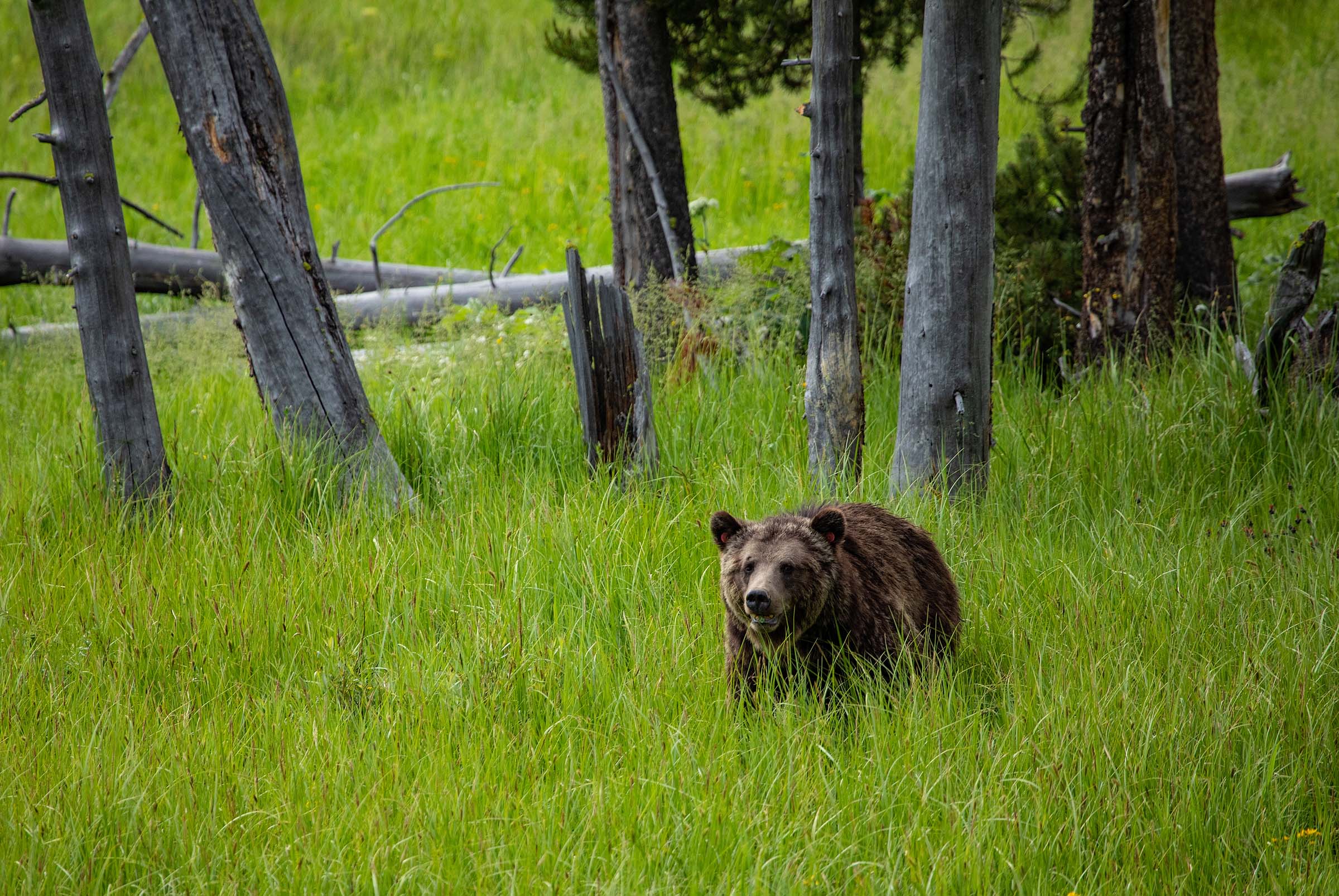 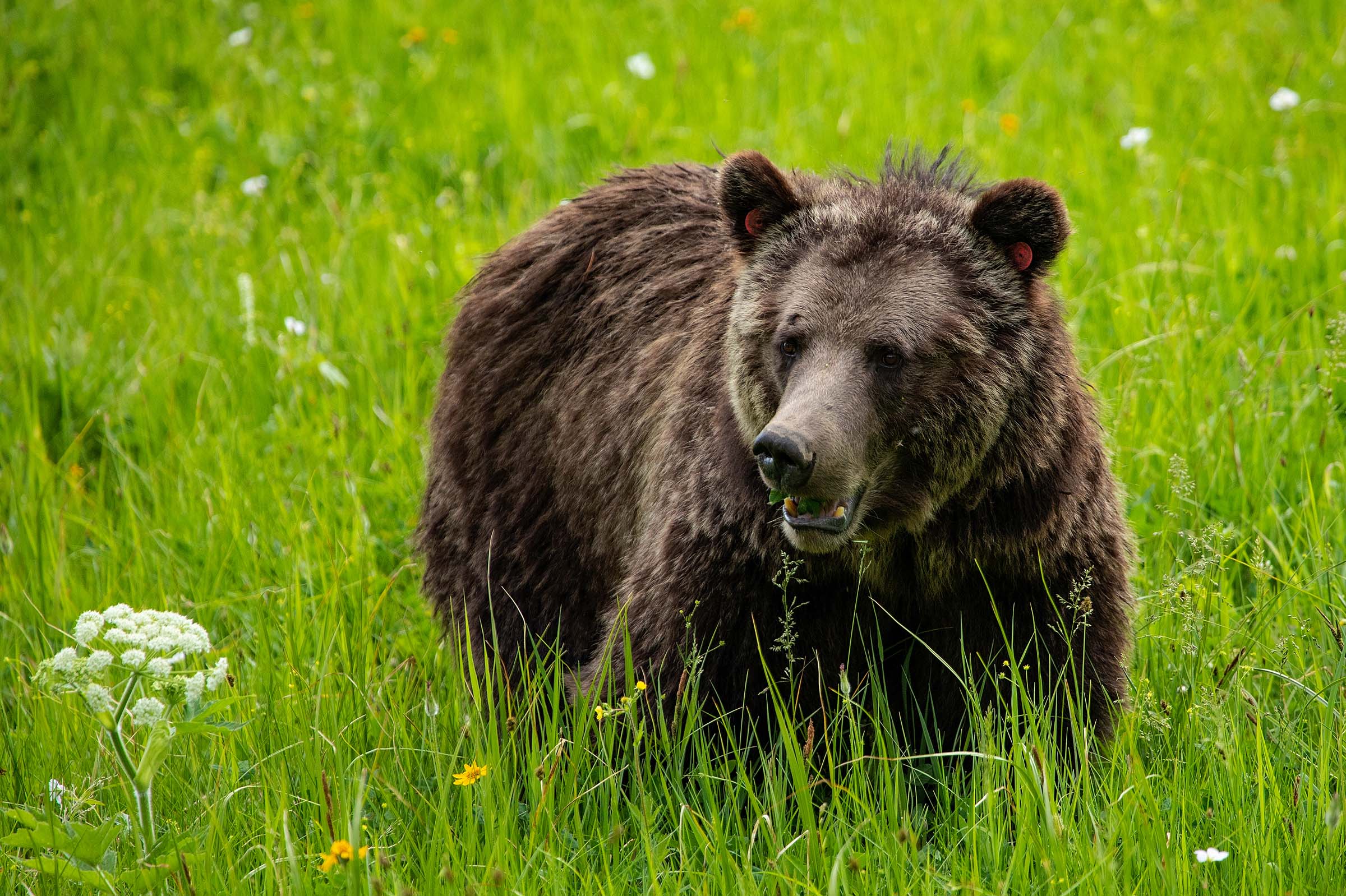 Throughout our trip we would end each day recounting what we had seen. We were surprised by all that been presented before us. As our trip was nearing its completion we had seen loads of bison, a black bear with her cubs, another black bear that crossed the road right in front of our car, a grizzly bear, a bald eagle, Canada geese, trout spawning, one snake, squirrels, a marmot, and herds of elk. The one animal we had not seen, and one that I kept wishing for, was a moose. We had basically put it out of our minds and were so thrilled to have seen so many bears that we felt pretty good about what we had seen. Then as we were driving along we see, once again, a line of cars stopped along the road. As we scanned the meadow my wife shouts “Moooose!”. Like with the grizzly, I stopped quickly and jumped out to photograph the young female as she enjoyed a meal of rich meadow grass. 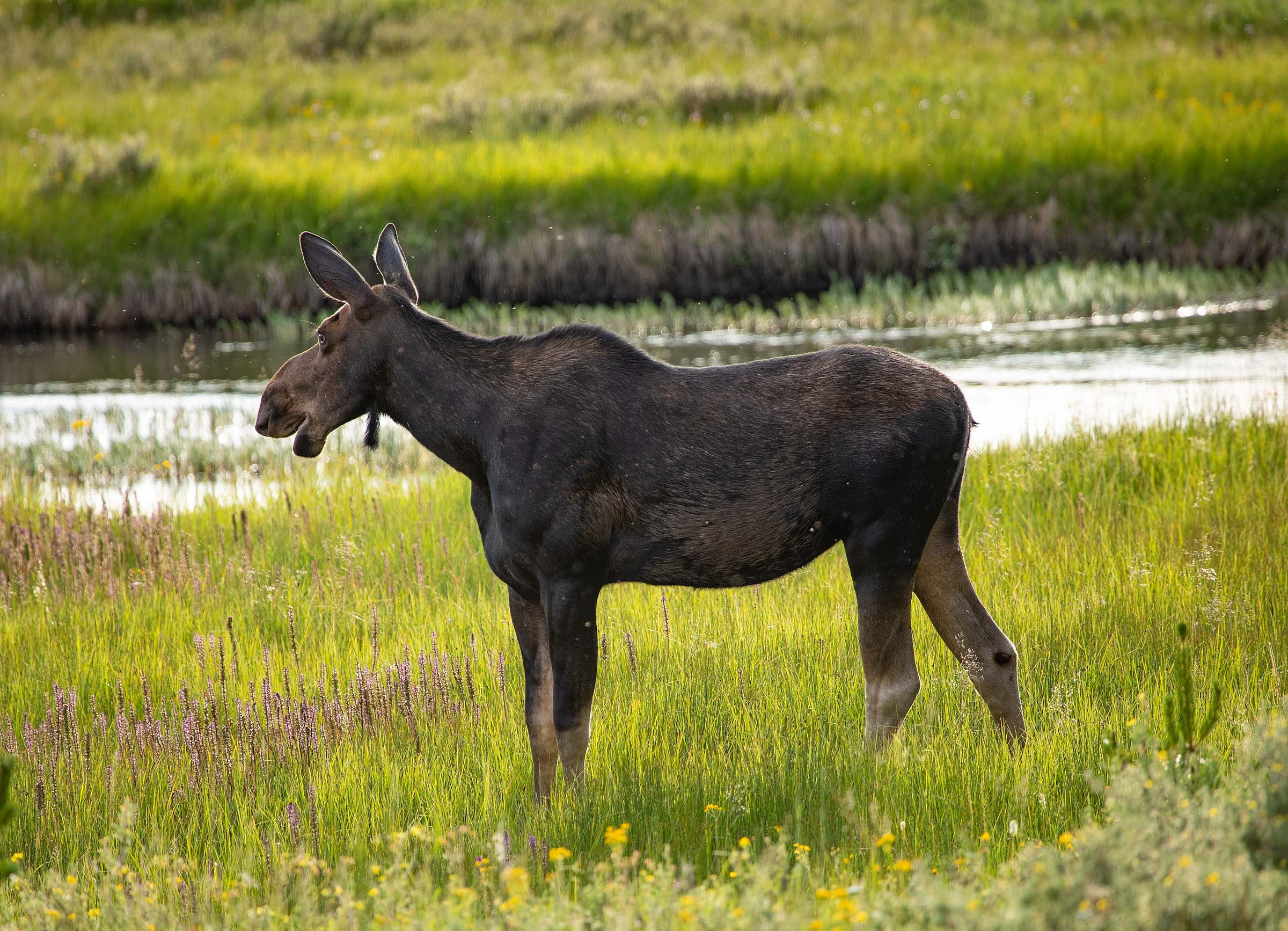 As our trip continued we found ourselves increasinly fascinated by all the diversity within the park. From one moment to the next we would either be surrounded by lush forests, soaking our feet in a cool stream, watching tons of water cascade over dramatic falls or suddenly be in a devastated wilderness while walking through a valley of geothermal activity.  I can’t imagine a place where a person can experience such extremes all within such close proximity. 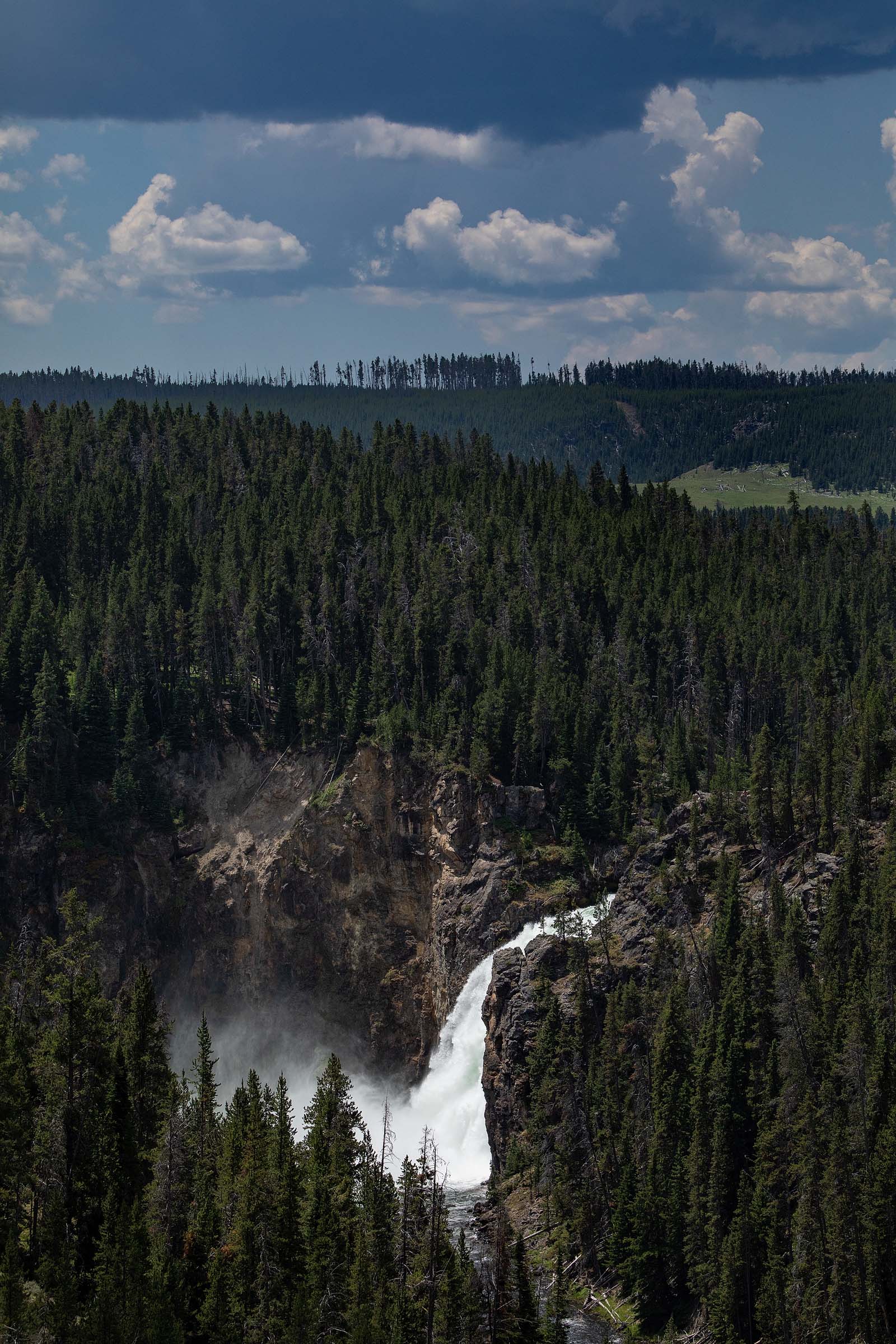 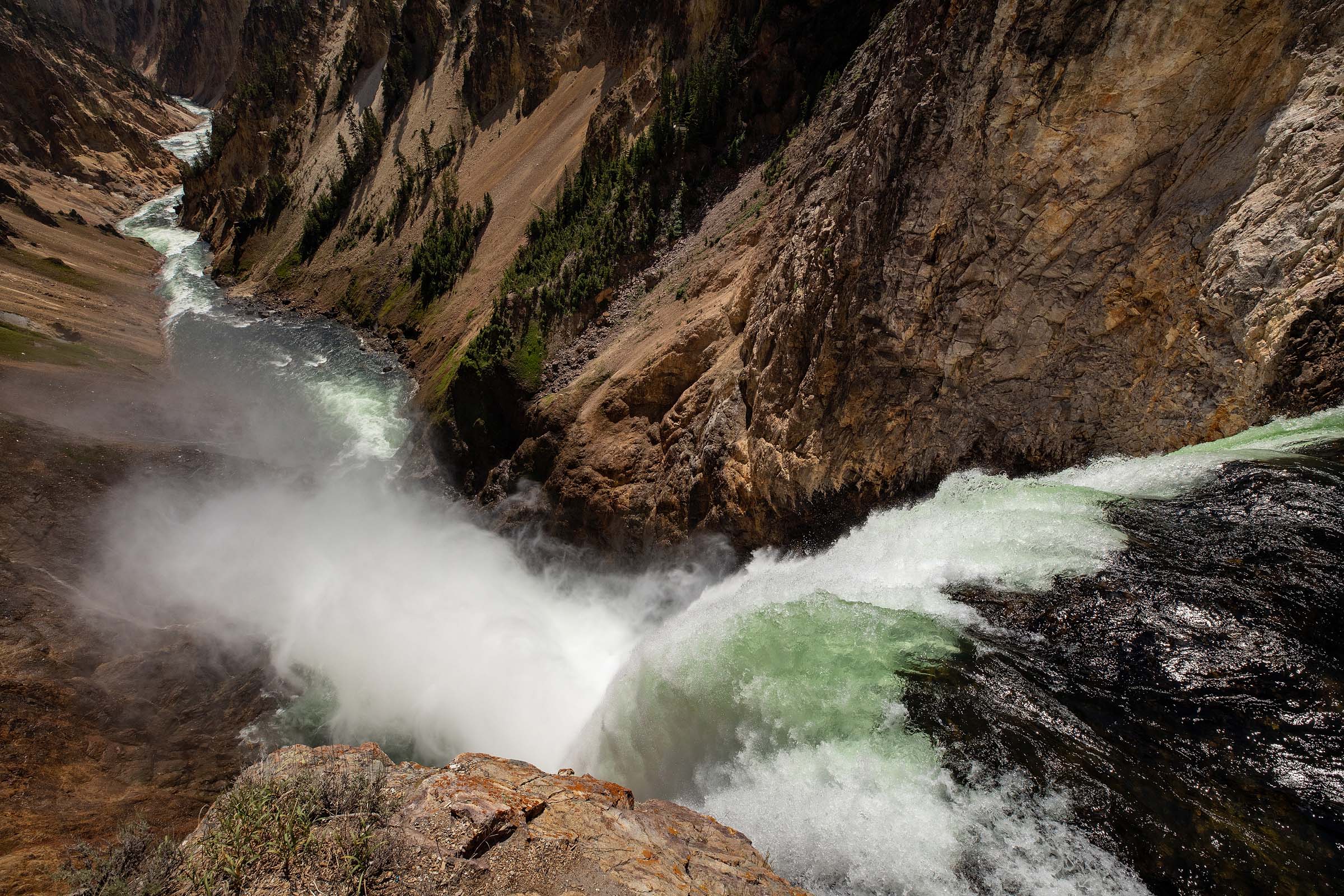 Views of the dramatic water falls along the Yellowstone River. On the left is the Upper Falls and on the right is a view from the brink of the Lower Falls. 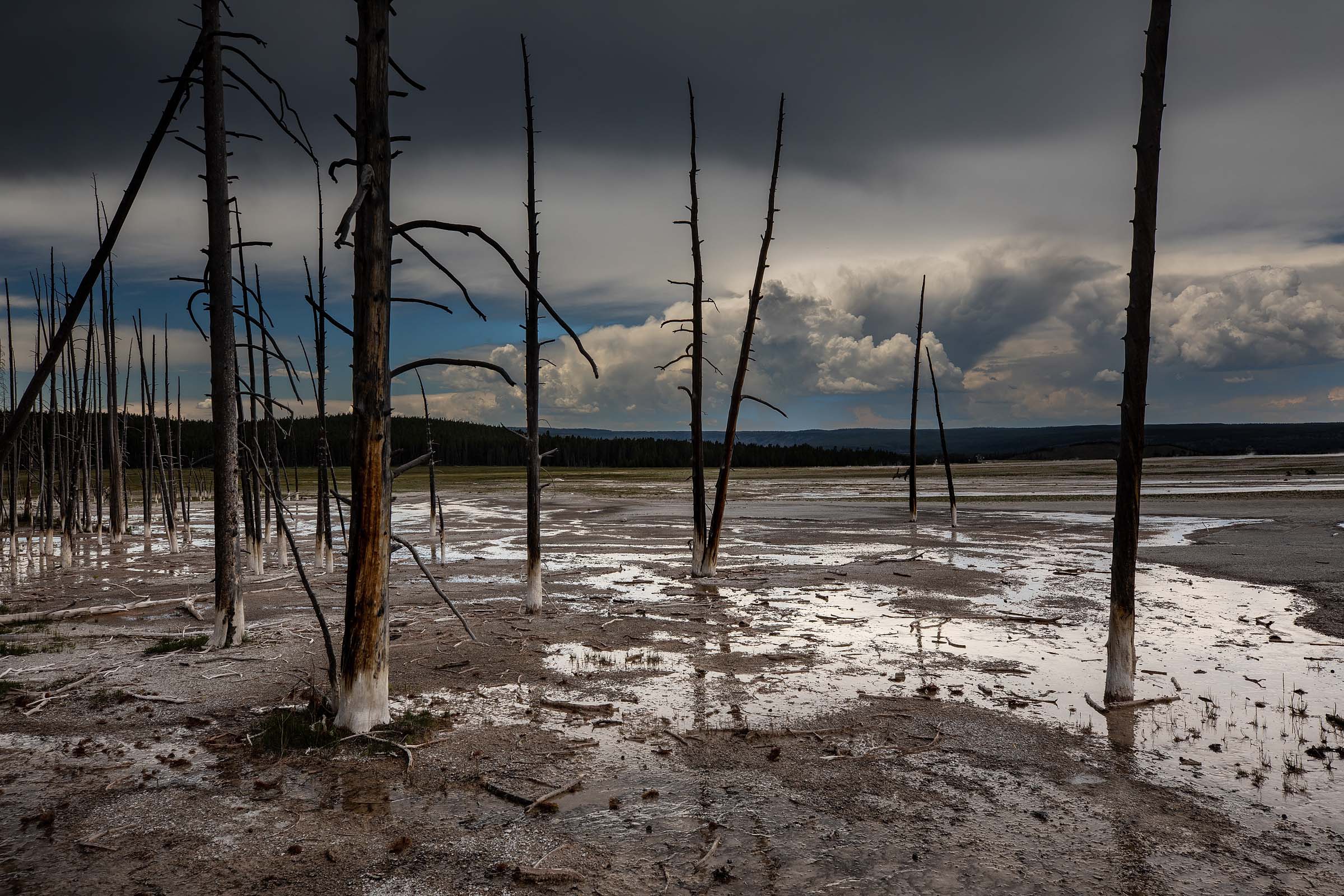 A view along the trail through Lower Geyser Basin. 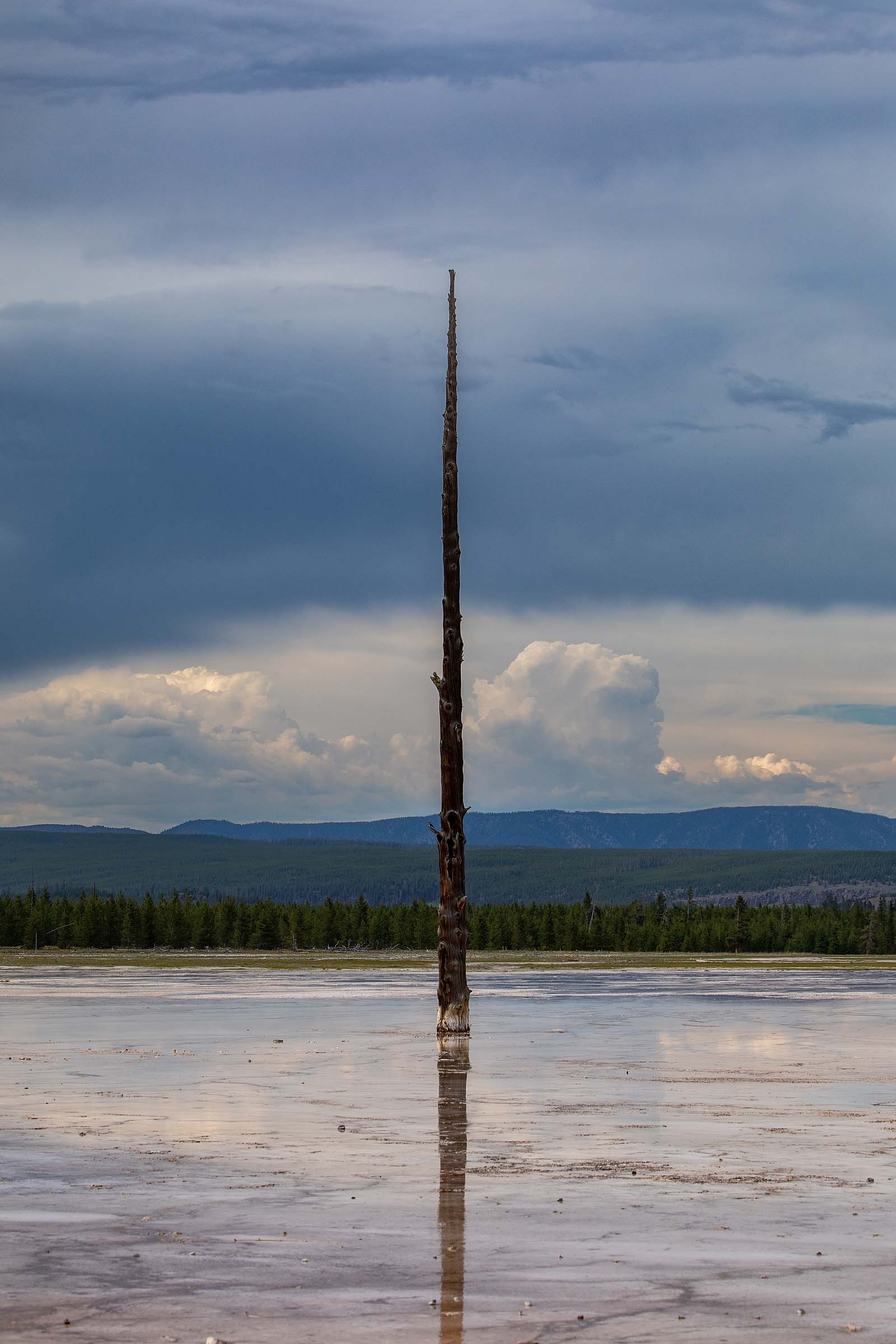 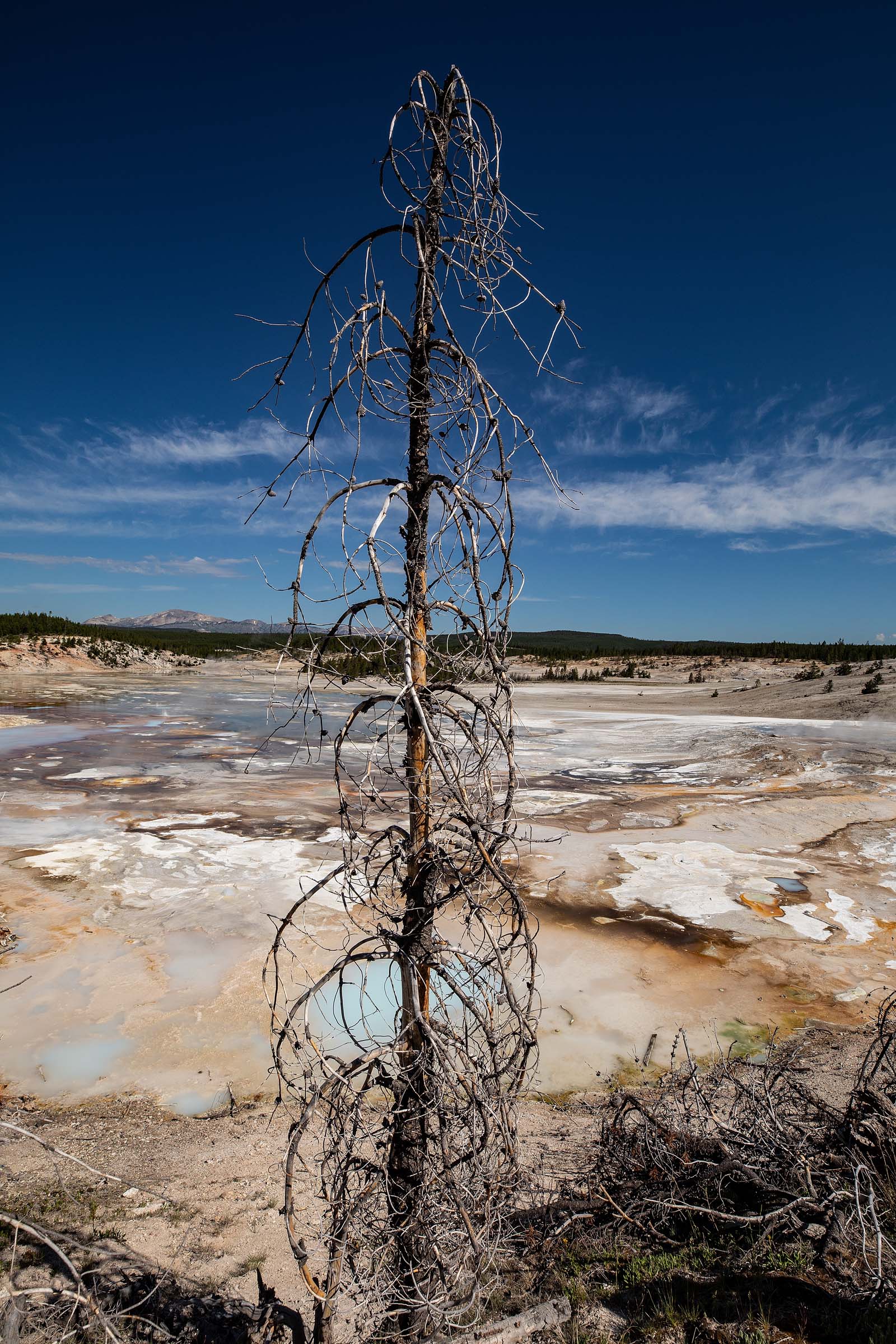 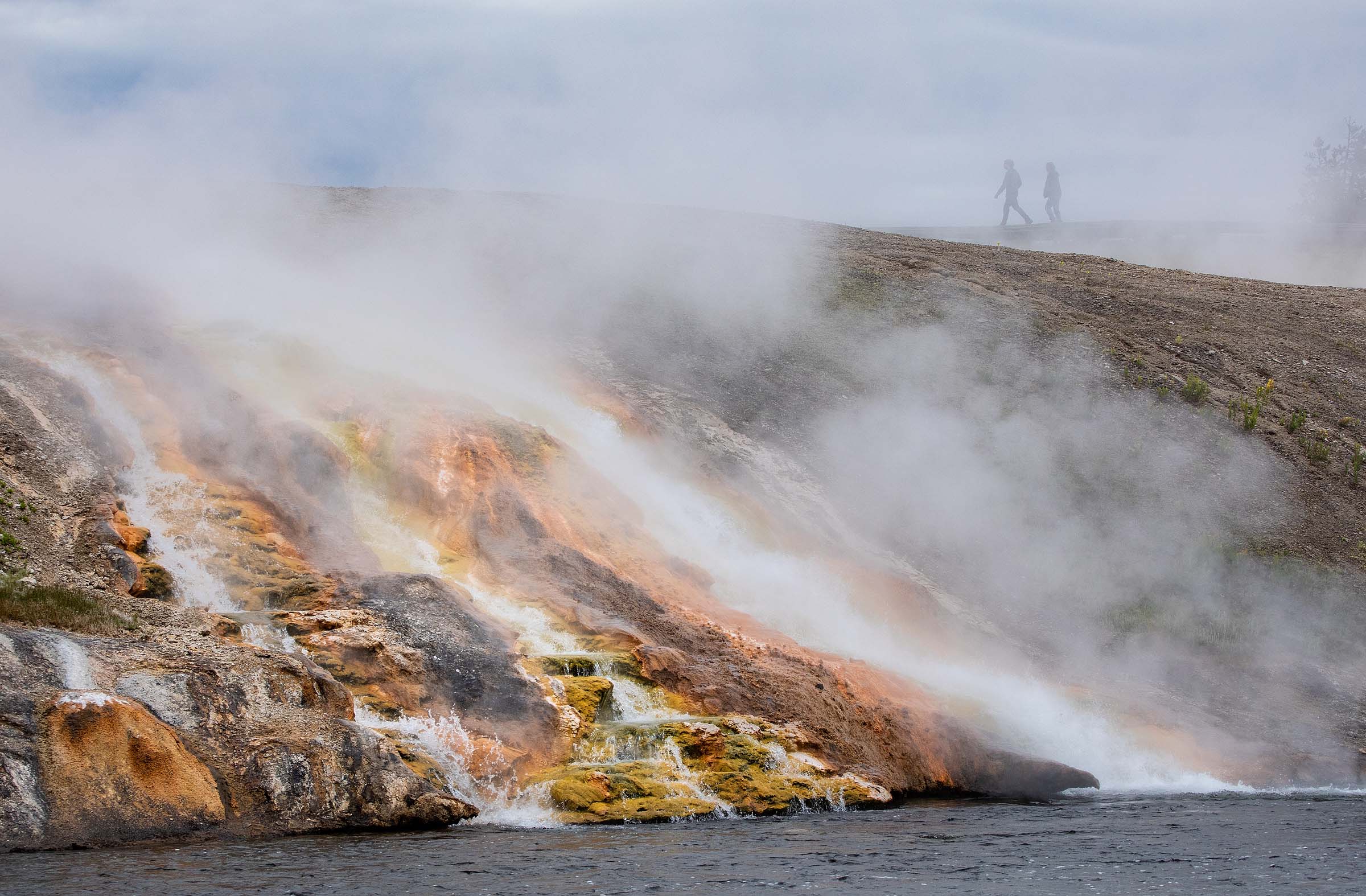 Steam fills the air as water flowing from the upper hot springs meets the cold water of Fairy Creek.

In addition to all the wildlife and dramatic geothermal activity within the park we also enjoyed all the blooming wild flowers. It’s something that is easily ignored when surrounded by so many other exciting things. But on this one day both my wife and I were mesmerized by a hillside covered in flowers. Some cars had slowed down, and even stopped, to see what I was photographing but soon just sped off when they realized no wild animal was about. 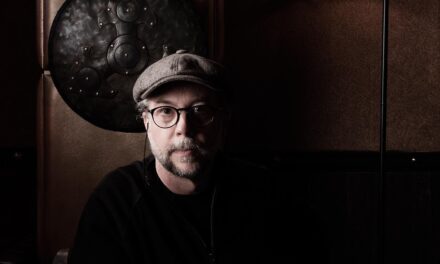 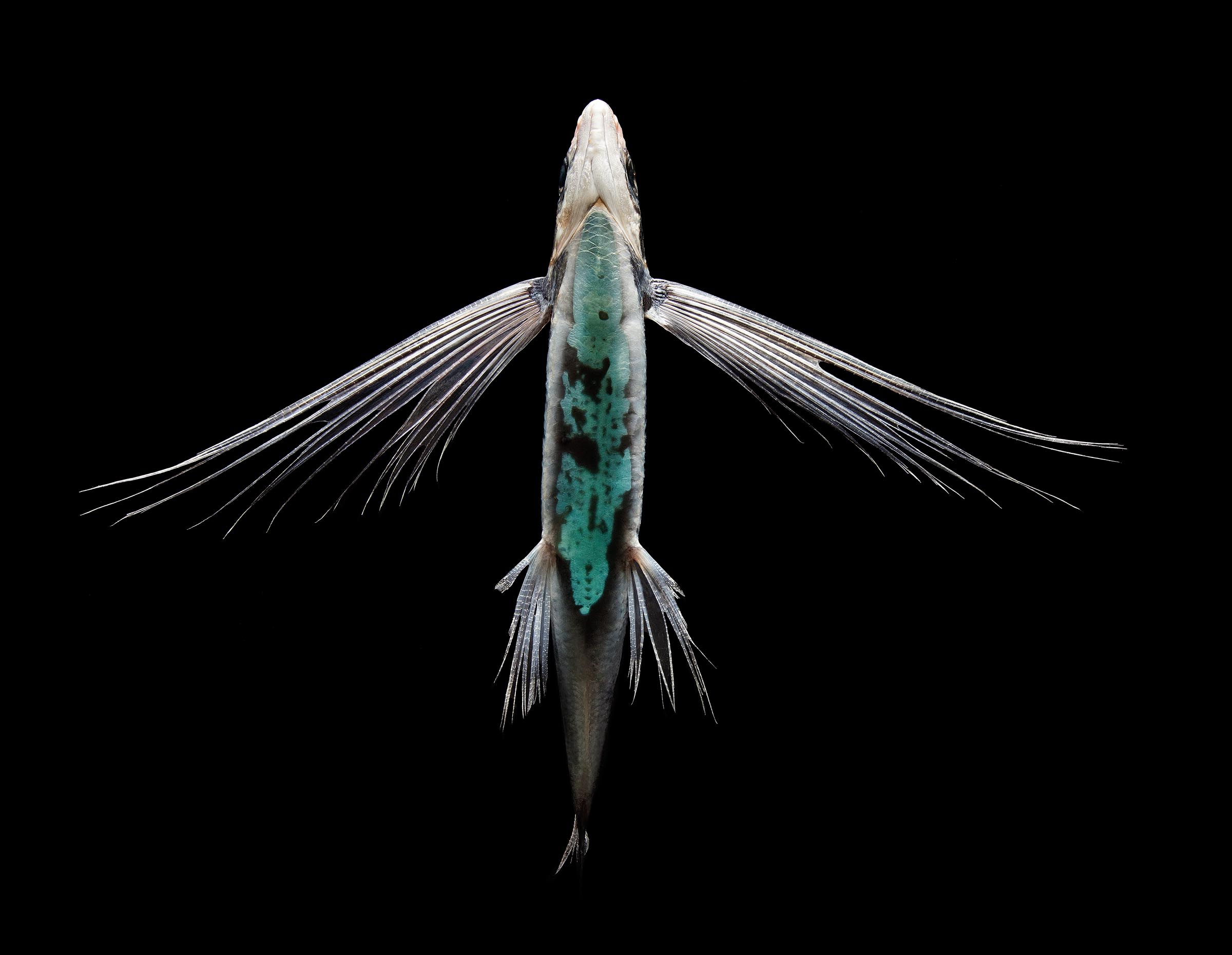 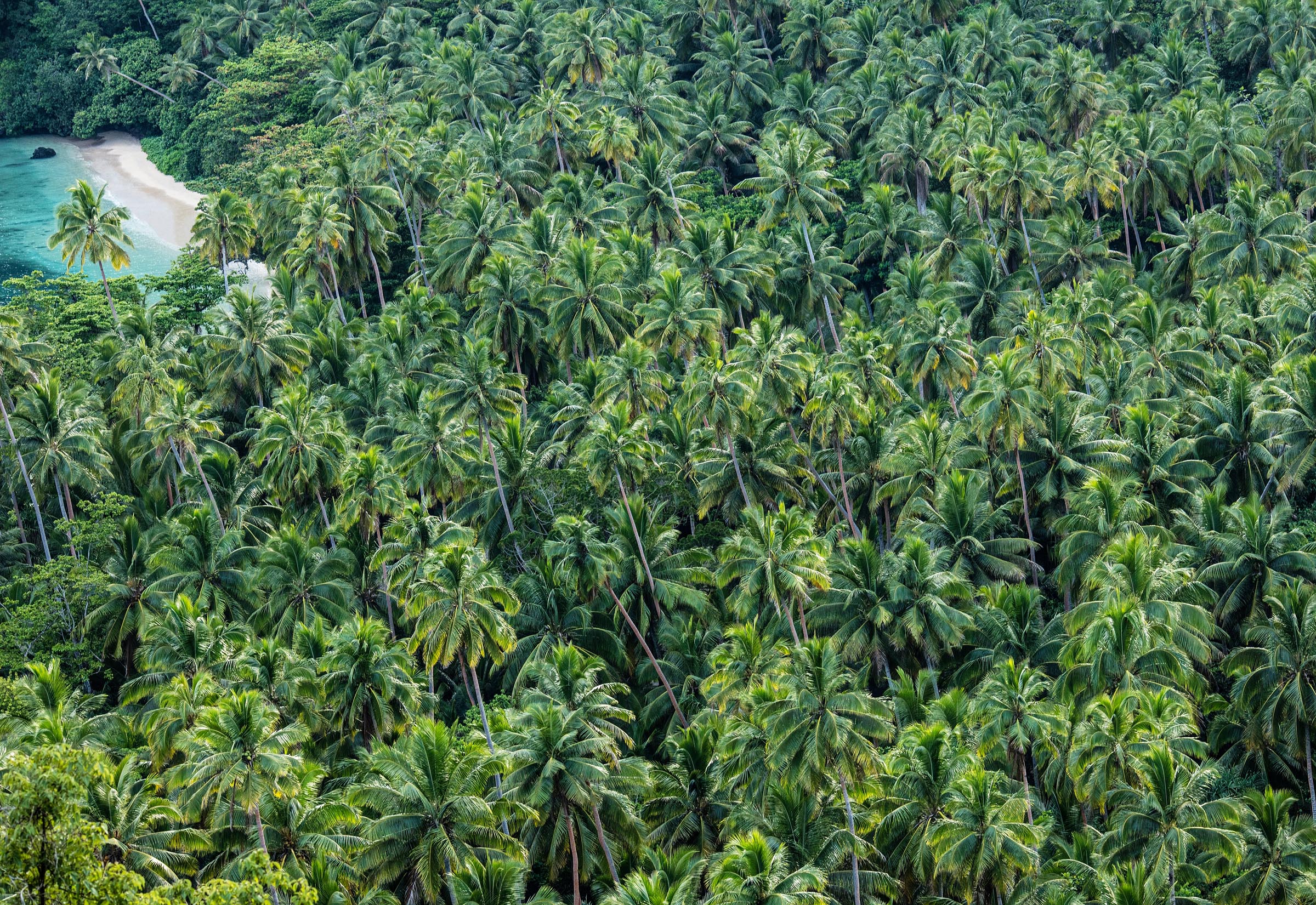 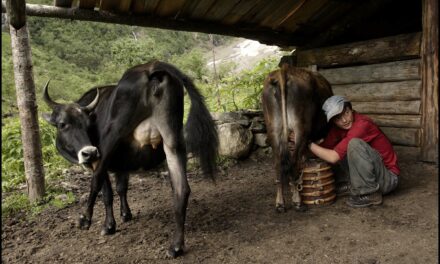