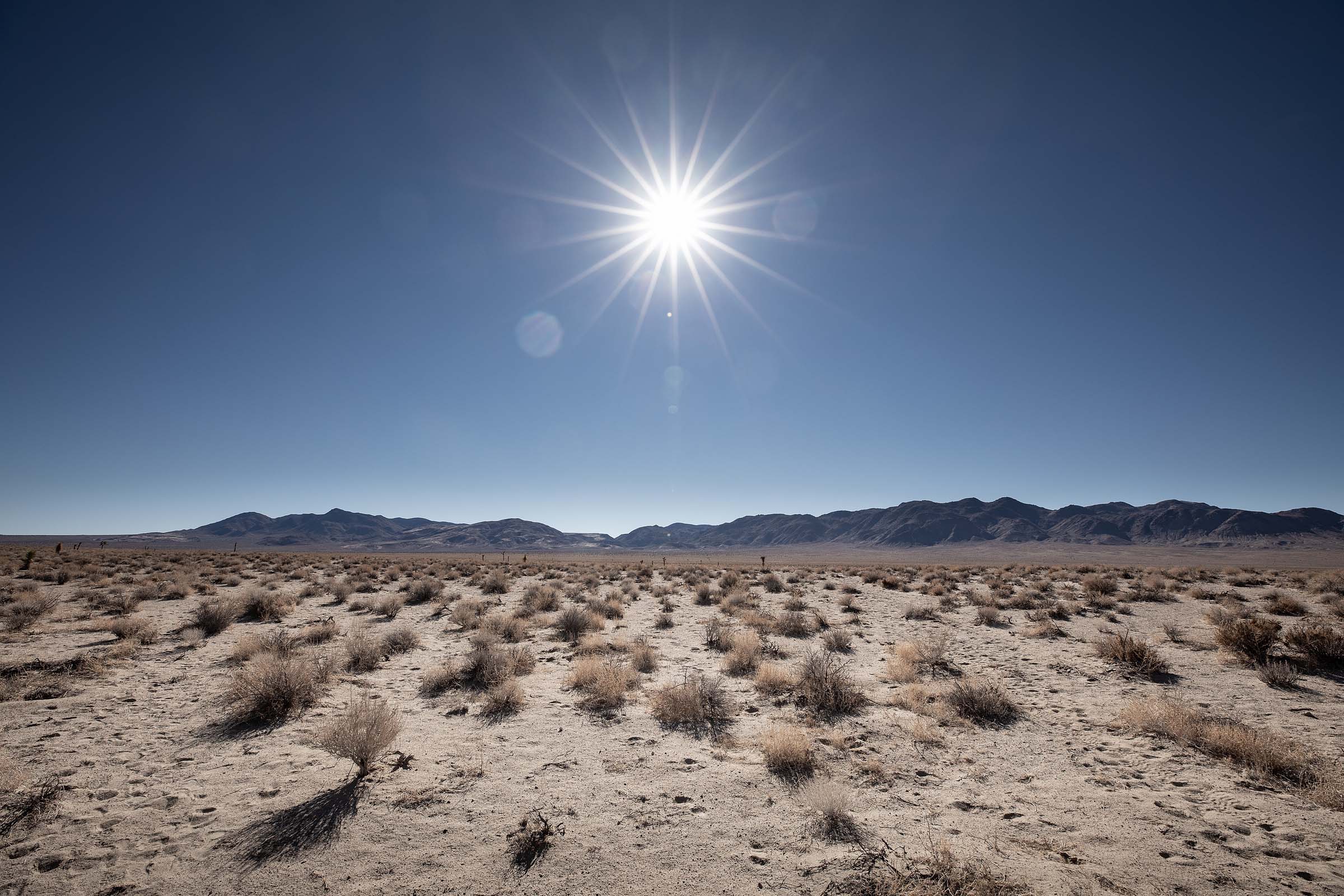 Somewhere out there is the spot where the band U2 did the photoshoot for their 1987 Joshua Tree album.

In Search of U2’s Joshua Tree

My brother, Matt, loves the band U2. So much so that when he learned of the location where the photos for their 1987 album, The Joshua Tree, were shot he wanted to visit the site. So during this past Thanksgiving Holiday break we teamed up and headed out into the desert.

One challenge in finding the actual Joshua tree was that we didn’t know exactly where the tree was located. Add to this was the fact that the tree, which is seen behind the group in the photo, died some years ago. All we knew was that the shoot location was out in the desert several miles east of Lone Pine, California.

We did have some location information which we garnered from the internet but it was not clear how accurate this information may be. My brother’s daughter, Kaitlin, was able to find some coordinates for us to plug into our Google Maps so we hoped that would get us closer to the magic spot. Since there were no markers along the highway we just had to stop the car where we thought the site may be and then venture a quarter mile into the desert and hope we stumbled upon the hallowed ground.

As we approached the pin on our nav system of the supposed spot we pulled off the highway and got out of our cars to scan the desert. Matt produced a set of binoculars and after a few moments he exclaimed, “I see it!” He then proceeded to walk out into the desert carrying with him a copy of the album The Joshua Tree.

I wasn’t sure what “it” was but I followed him anyway. 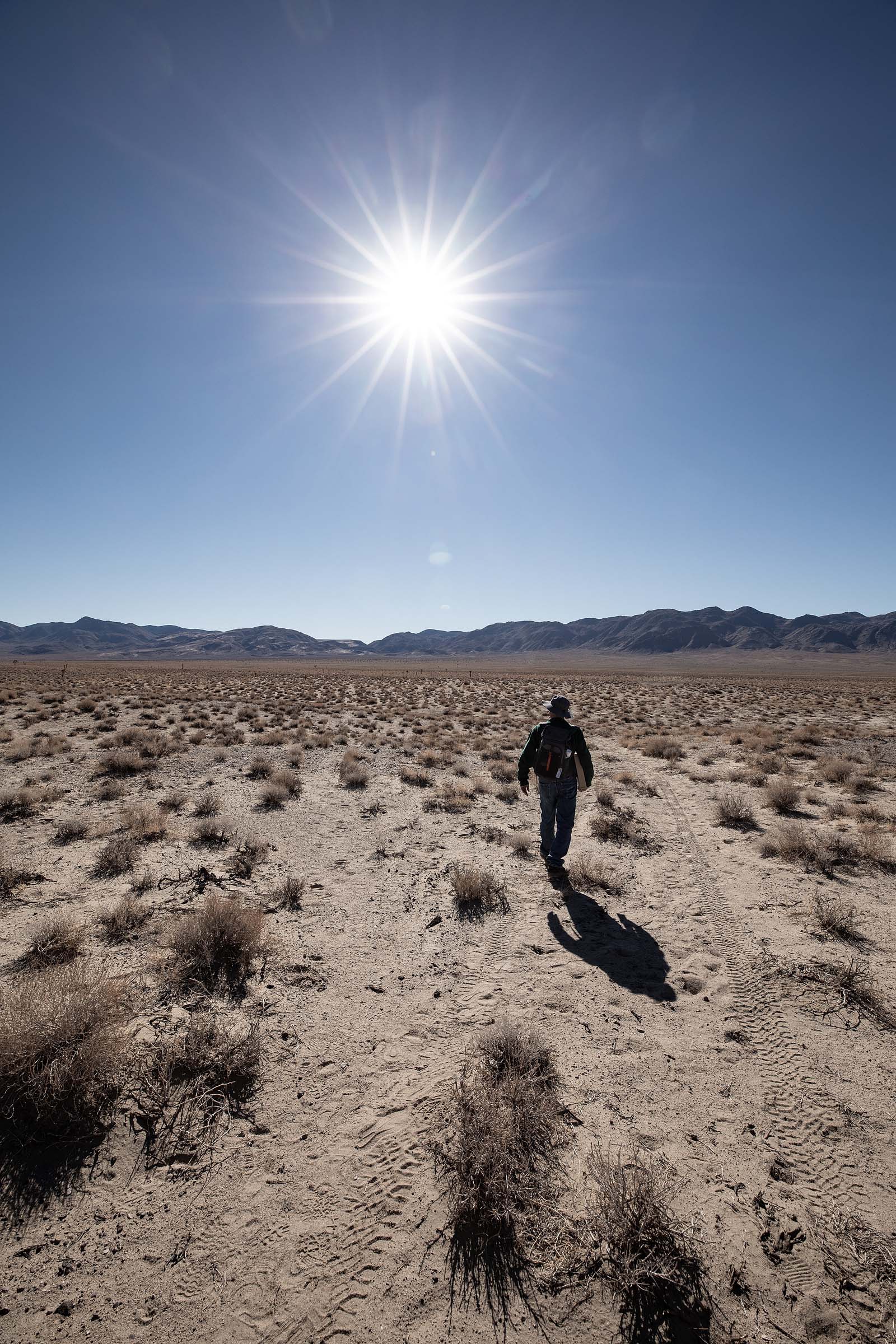 I still haven’t found what I’m looking for. 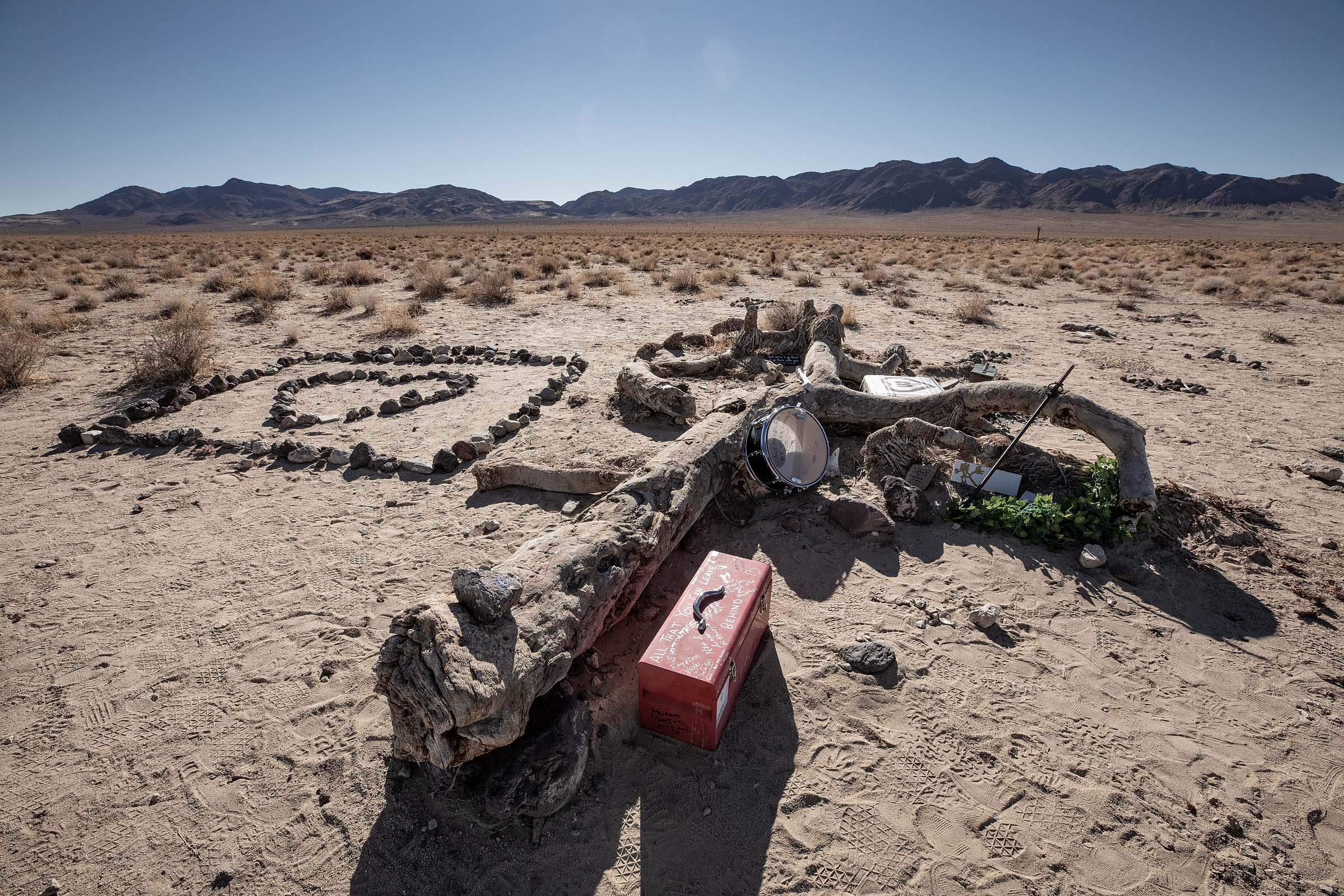 After just a few minutes of walking we found what we were looking for. The fallen Joshua Tree laying on its side, slowly being consumed by the desert environment. All around it were remembrances created by gathered stones, a bronze memorial encased in concrete, and items left behind by other pilgrims. 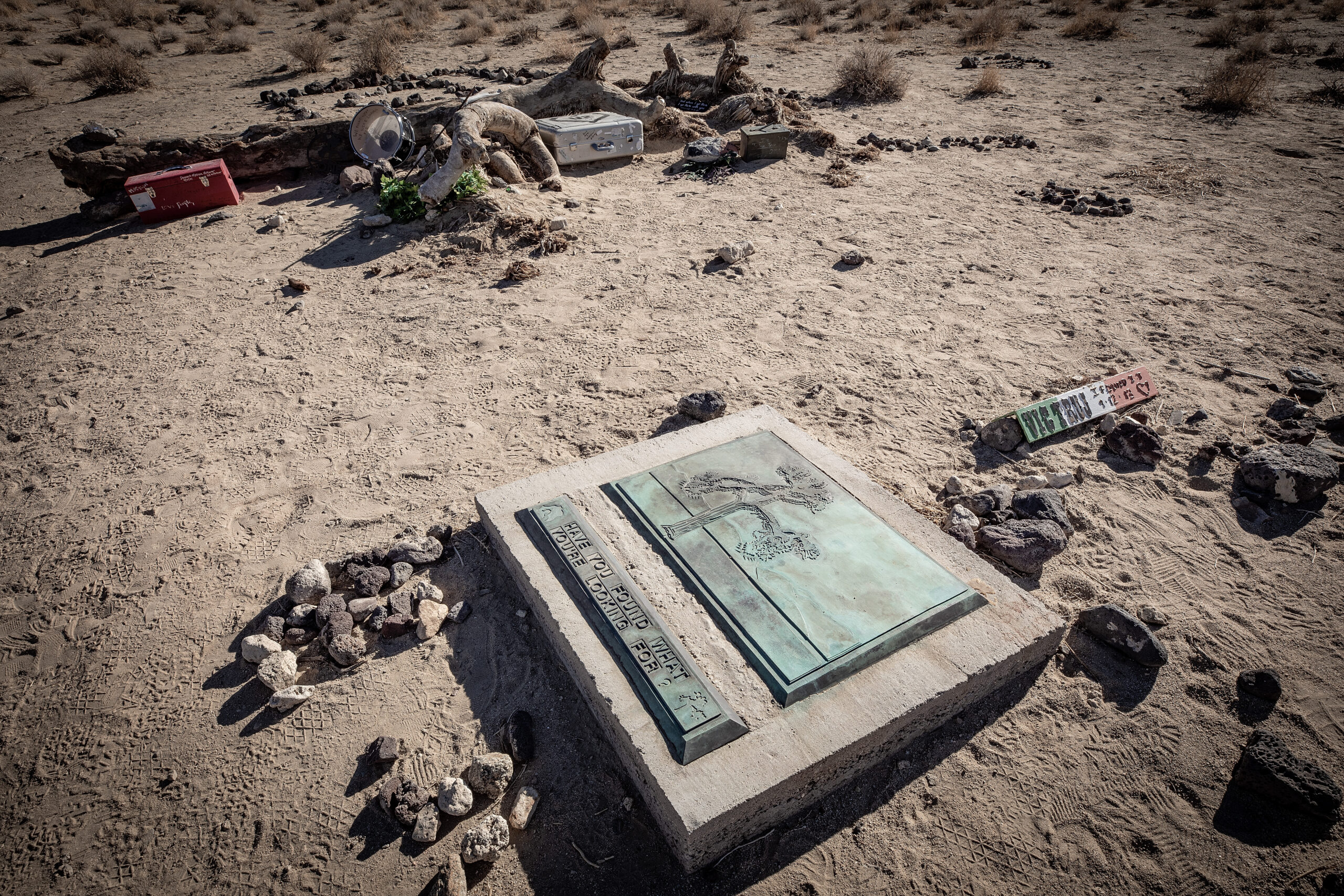 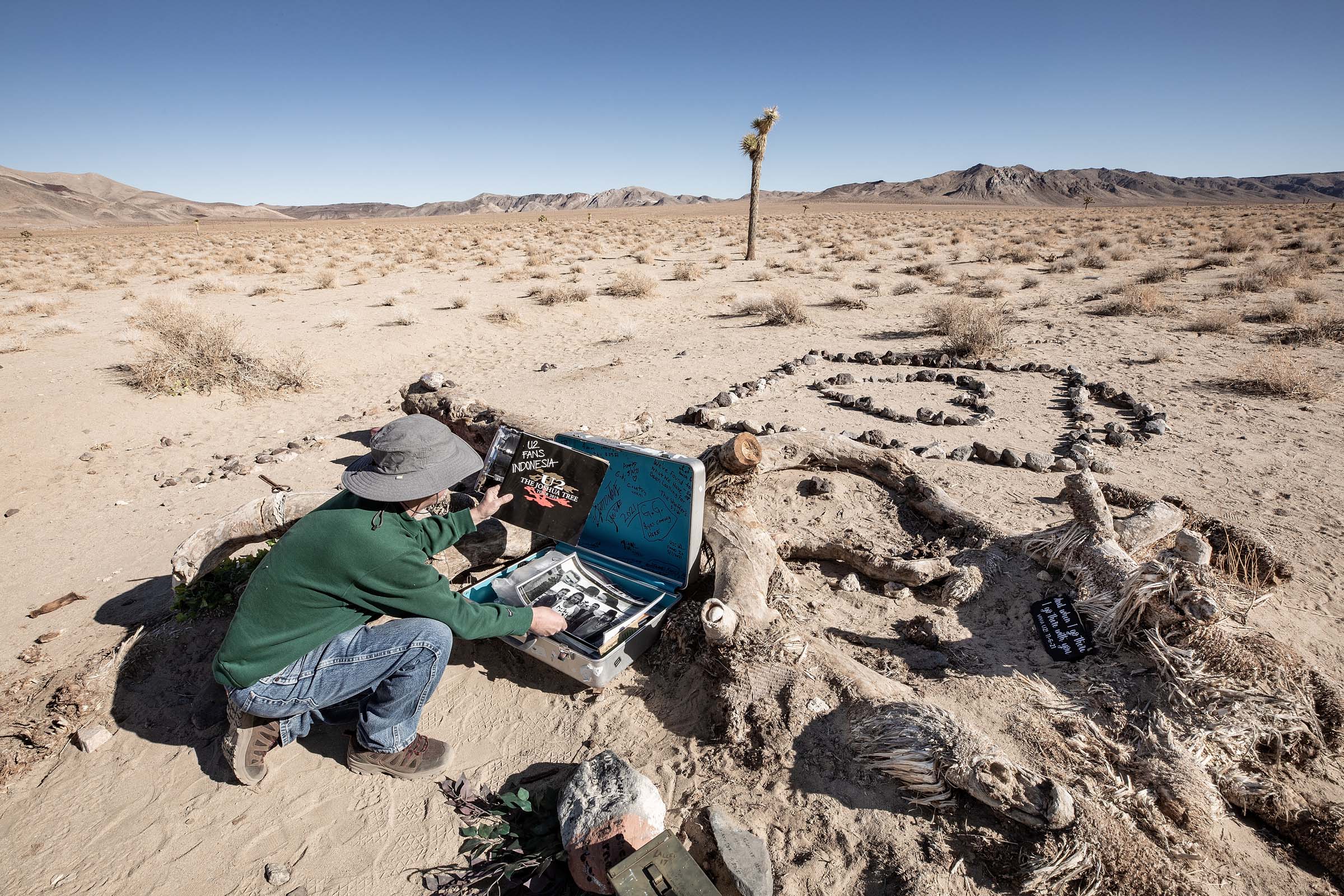 Among the items was a silver suitcase which my brother slowly opened to investigate what it might contain. To our amazement was a treasure trove of photos, concert programs and personal notes to the band. One program came all the way from a concert held in Indonesia. There were two other smaller containers, one a red tool box and the other an ammo box, with each containing similar types of items. Seems U2 has made quite an impact on people all over the world. 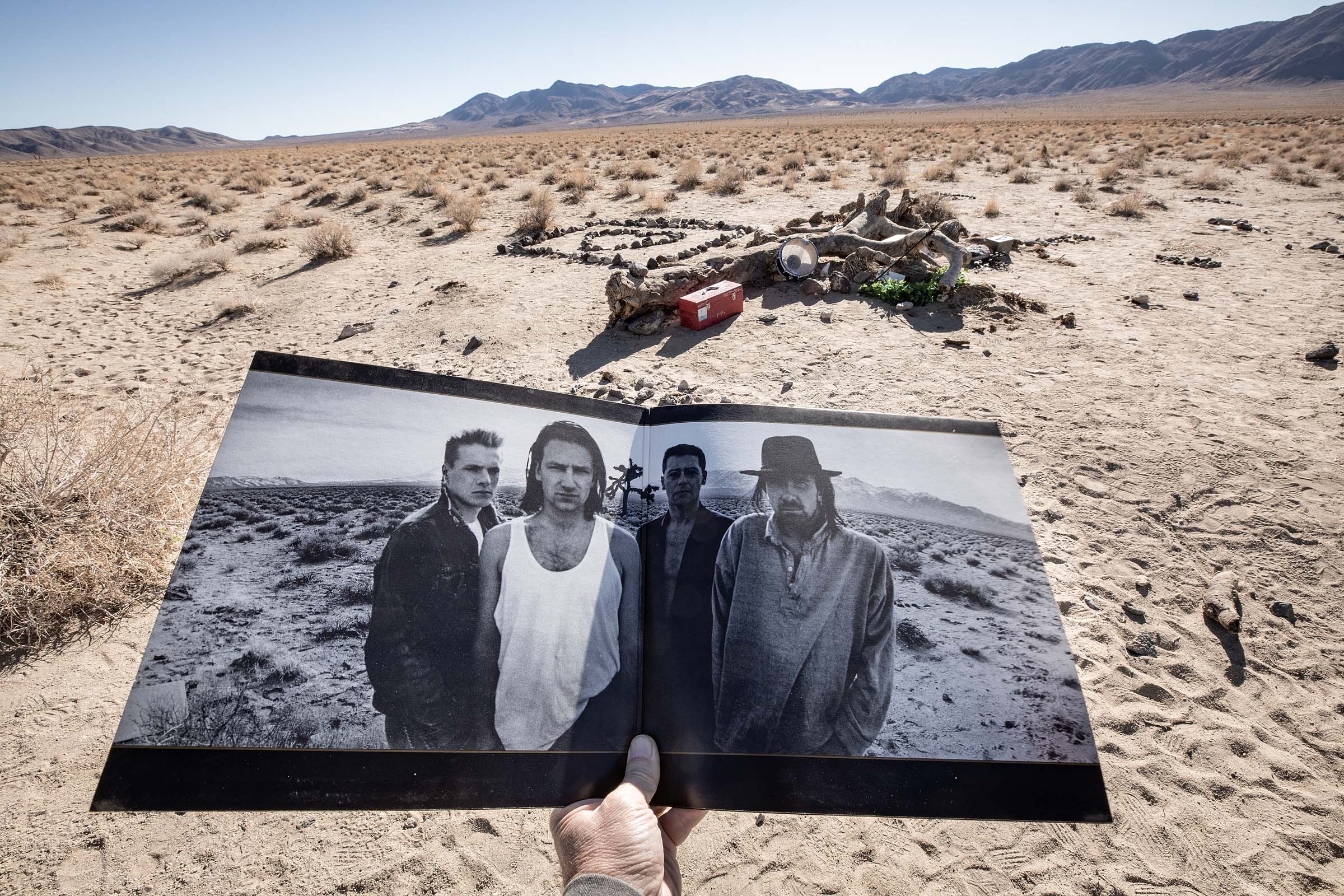 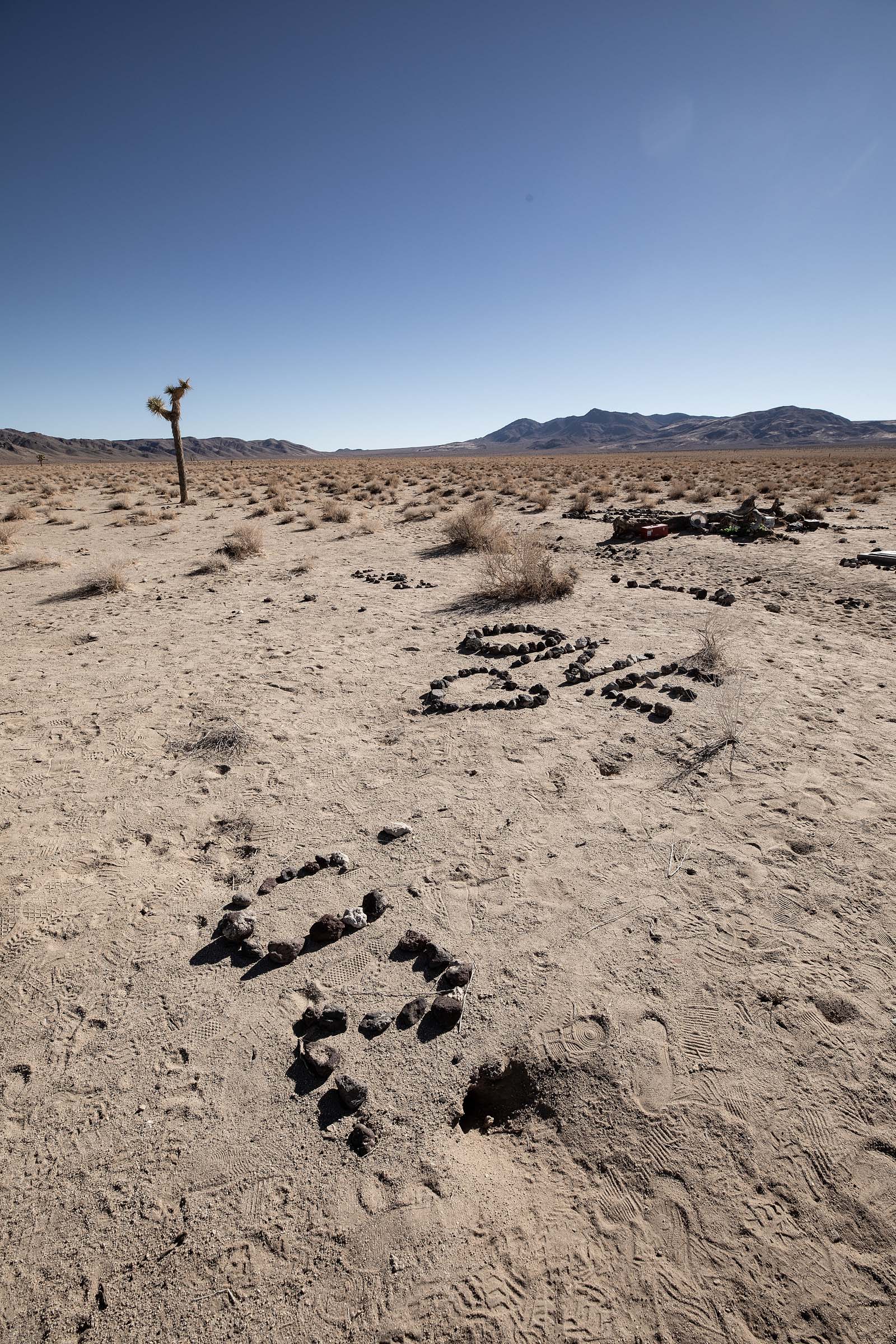 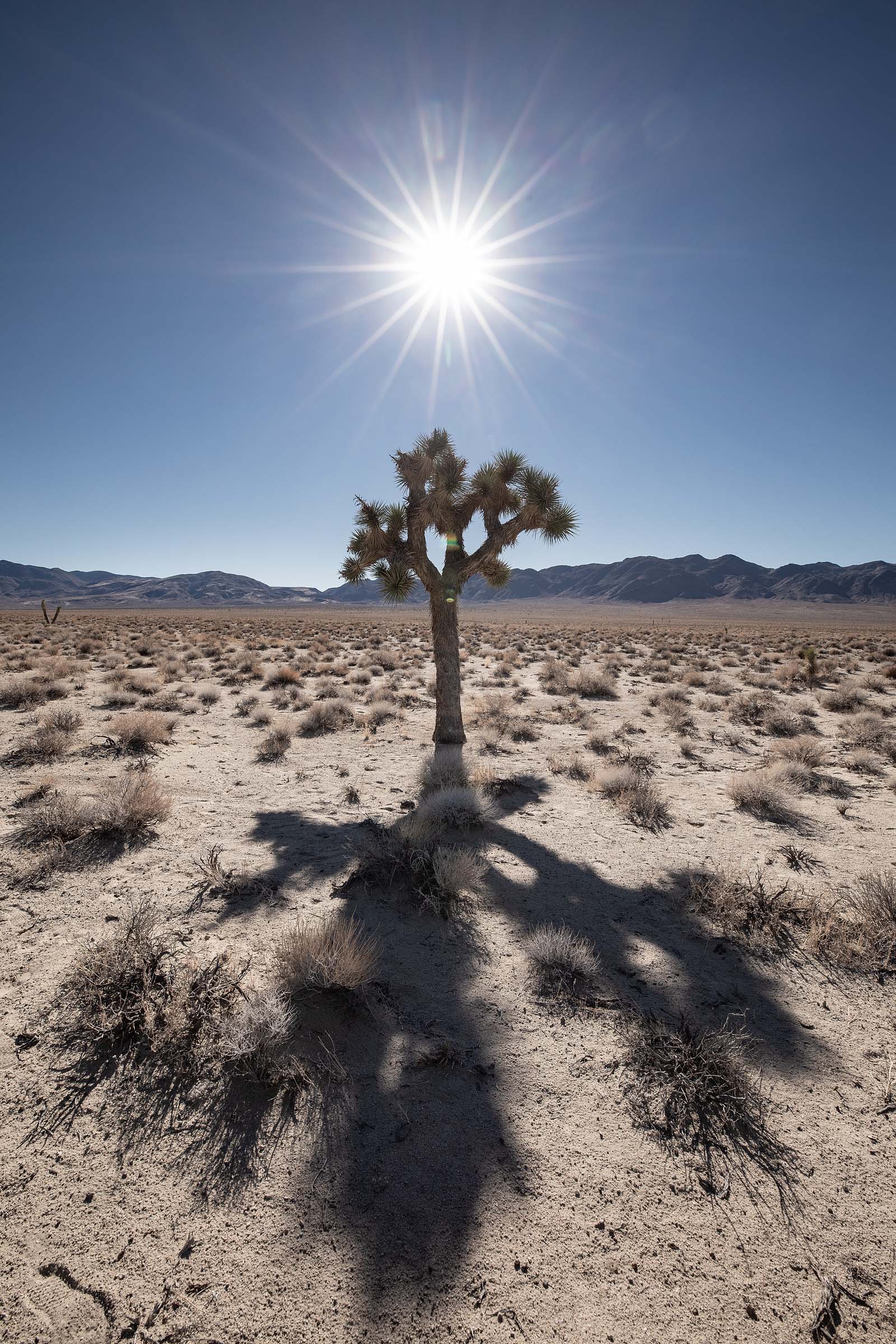 Nearby we spotted another Joshua Tree that looked very similar to the one portrayed in the album. Perhaps it was the offspring of the original. We ventured over to have a closer look. It seemed that we weren’t the first people to think this tree looked a lot like the original as there were numerous foot prints all around the tree. There really wouldn’t be any other reason for visitors to hike to this part of the desert other than to stand where the members of U2 once stood. We were walking in Bono’s footsteps. 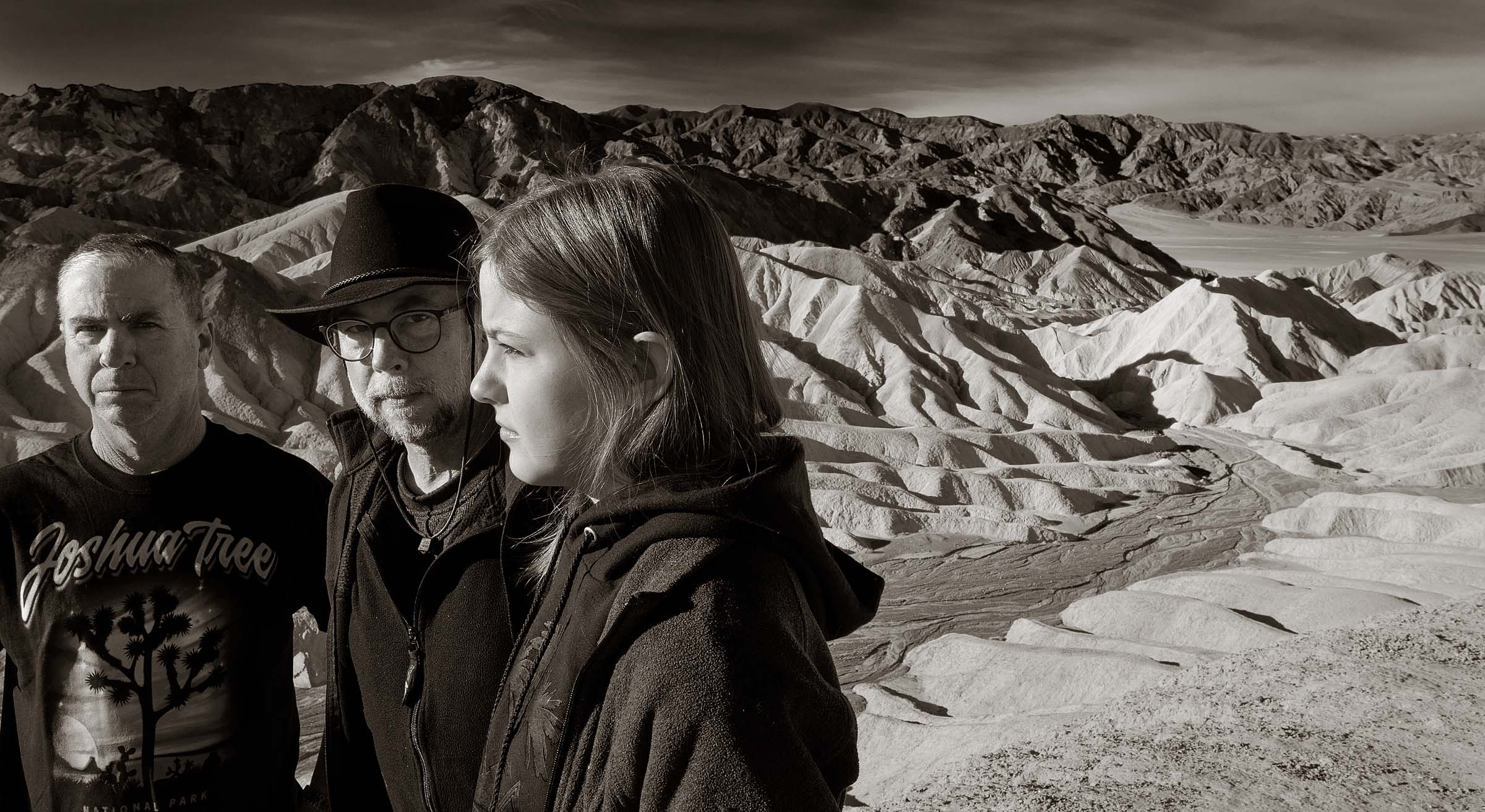 Later in the week we were joined by my brother’s daughter, Kaitlin, so we decided to head up to Zabriskie Point in Death Valley National Park where the cover photo for U2’s Joshua Tree was shot. We were a band member short but did our best to recreate the iconic cover image. 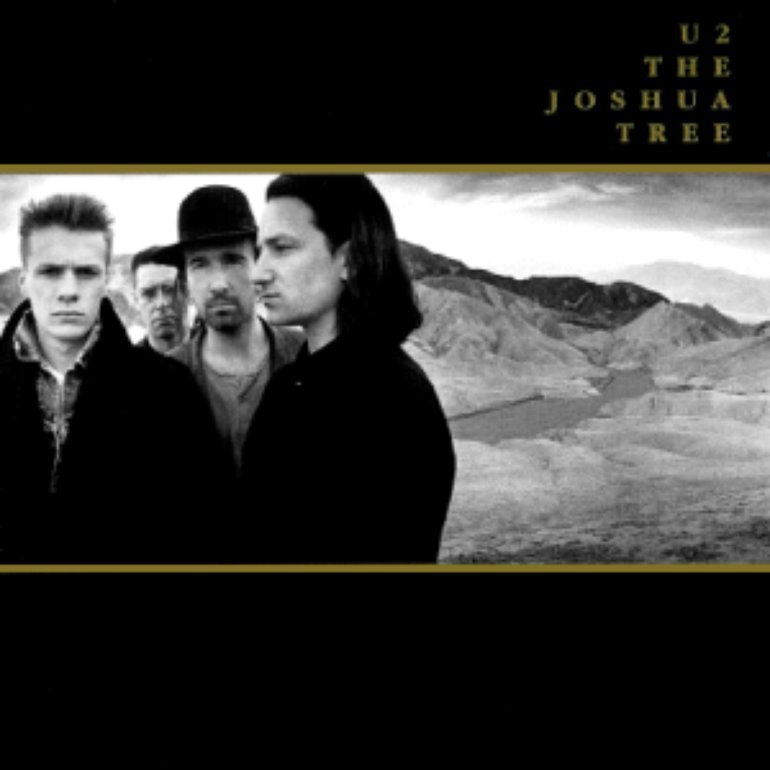 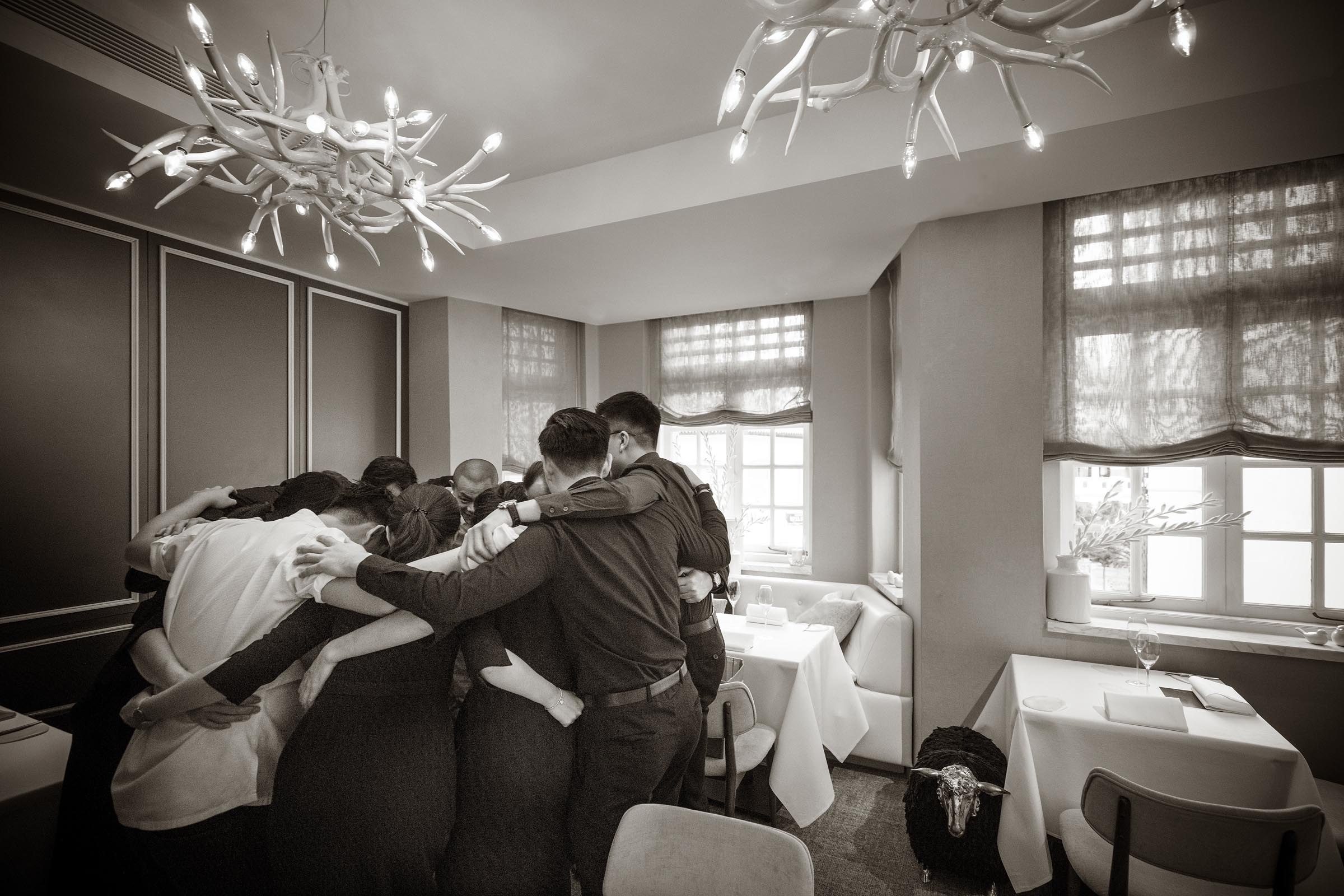 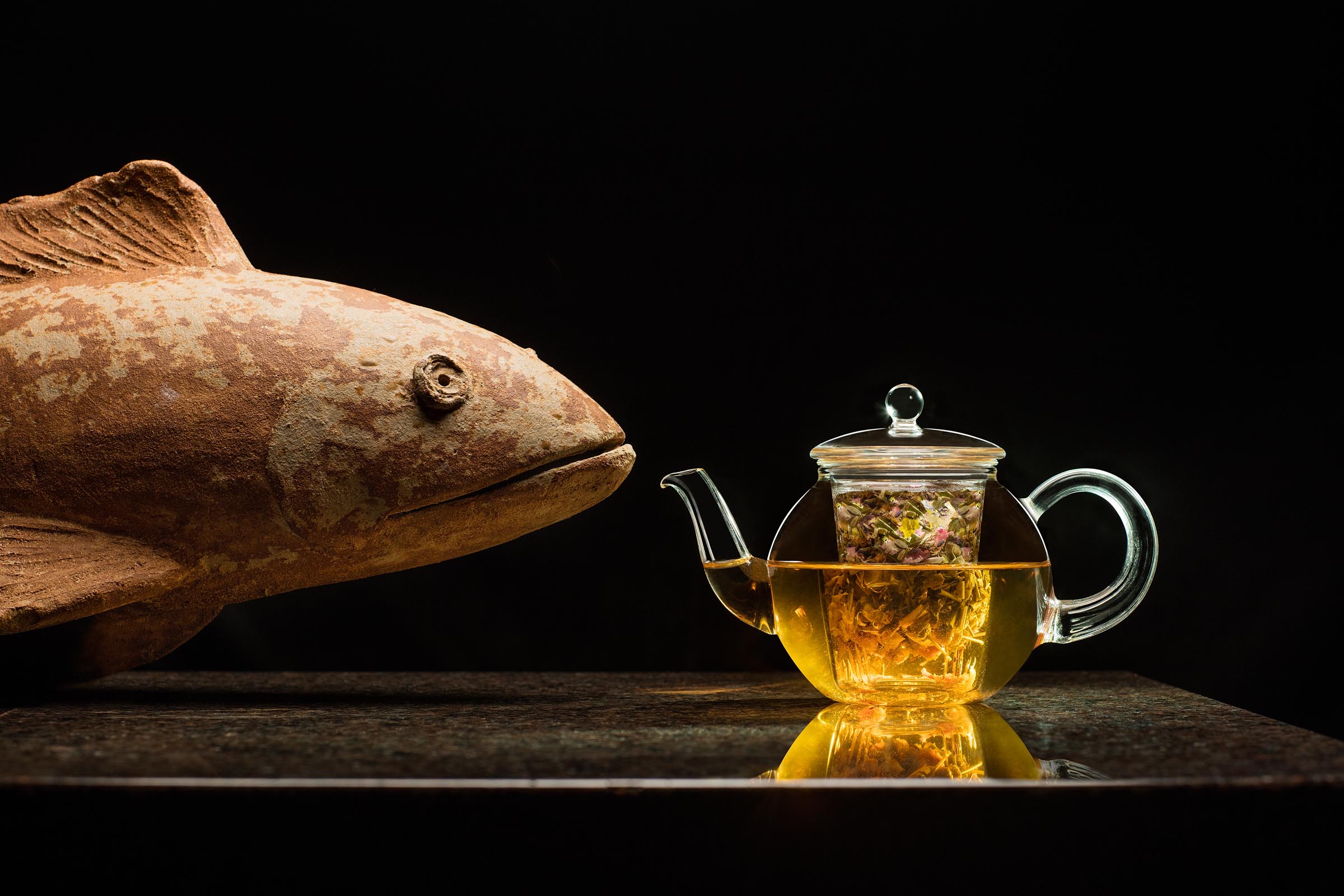 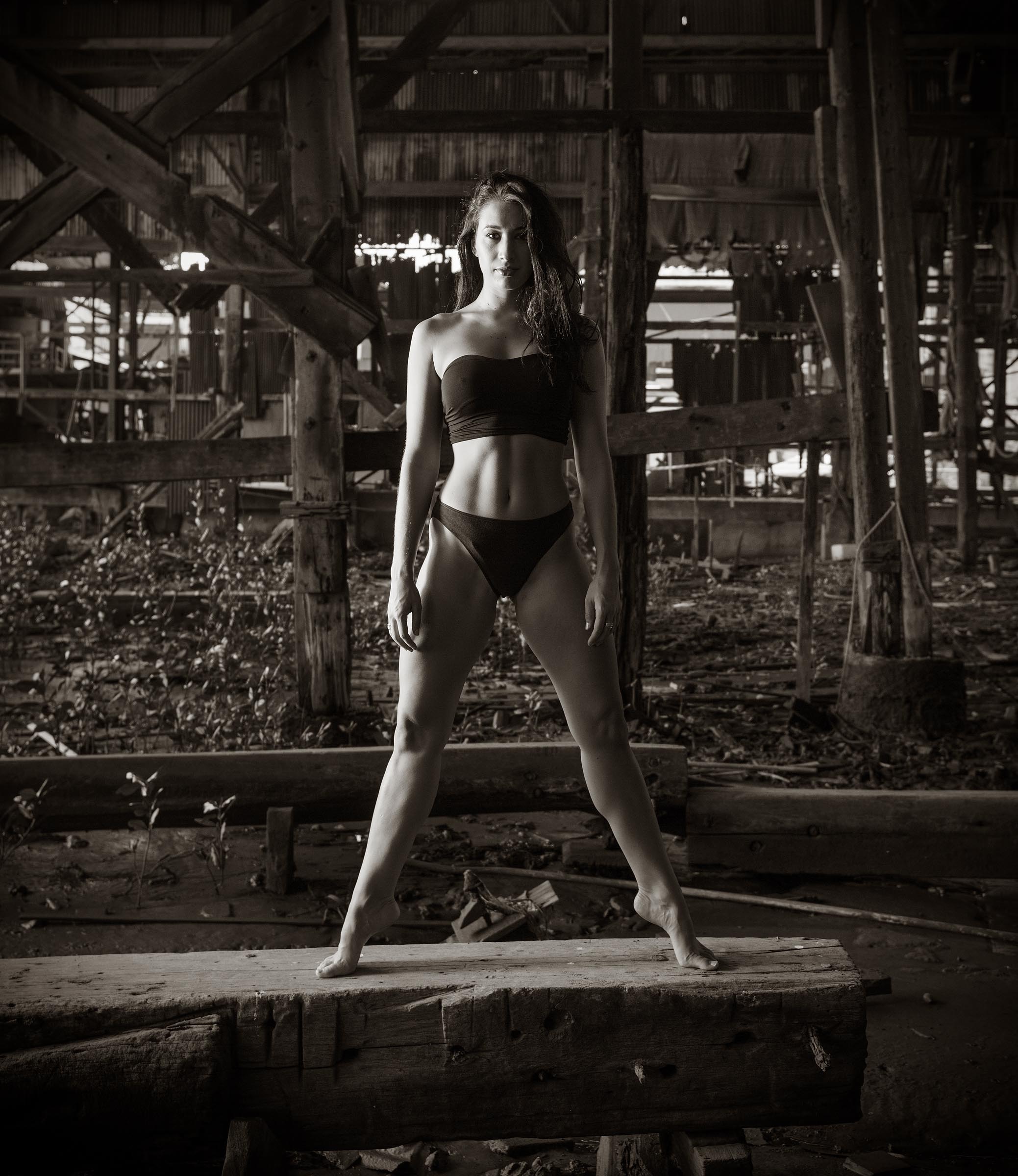 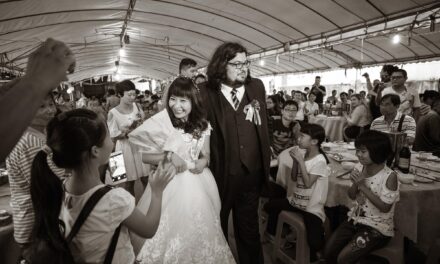